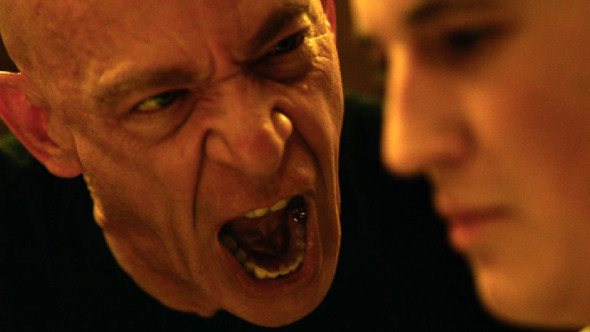 2014 was a banner year, with great films in an enormous range of genres: blockbusters and indies, horror and SciFi, dramas and comedies, as well as films from first time filmmakers, a lot of great stuff from women directors, and an unusually high number of excellent films with one-word titles. No idea that that trend might mean. Anyway, today we walk through our 20 favorites of the past 365 days.

20. Into the Woods: Rob Marshall proves again that he’s the man you want filming a musical, using inventive techniques to bring the  cross-cutting fairy tale narratives in this Sondheim musical to glorious life. Not your traditional Disney effort, Into the Woods offers a sophisticated, often dark but insightful and imaginative look at the other side of fairy tales.

19. The Lego Movie: The tone is fresh and irreverent, the voice talent spot-on, and the direction is endlessly clever. The Lego Movie was the most fun to be had at the cinema in 2014.

18. Guardians of the Galaxy: Director James Gunn nails the tone, the color, the imagery, and the sound of one Earthling dartin’ about space scavenging, smooching, and basically living the dream. The effortlessly likeable Chris Pratt leads a crew of ragtag misfits who collectively become the most enjoyable team of intergalactic scoundrels since Han Solo piloted the Falcon. This is the definition of a great summer movie.

16. The Imitation Game: A wonderful mix of exciting historical mystery and heartfelt examination of the complicated man at the mystery’s center, The Imitation Game is a film about secrets boasting an Oscar-worthy performance from Benedict Cumberbatch.

15. American Sniper:  The bio of America’s most lethal sniper is tense, heartfelt, and wise. Director Clint Eastwood hasn’t been this invested in years, and along with an astonishing lead performance from Bradley Cooper, strikes just the right tone with a story that could have easily been mined for manipulation. It isn’t, which is another reason to salute American Sniper.

14. Locke: A masterpiece in simplicity, Locke tags along on a solo car trip: just you, the great Tom Hardy, and several simultaneous crises he handles on his mobile.

13. Under the Skin: This hypnotic, low-key SciFi thriller – the latest from filmmaker-to-watch Jonathan Glazer – follows Scarlett Johansson around Glasgow in a van. Light on dialogue and void of exposition, Under the Skin demands your attention, but it delivers an enigmatic, breathtaking, utterly unique vision of an alien invasion.

12. The Babadook: A familiar tale given primal urgency, the horror fueled by compassion, the terror unsettling and genuine – this film is more than a scary movie, and it immediately ranks among the freshest and most memorable the genre has to offer.

10. A Most Violent Year: This gem is a film about the merits versus moral compromise of the American dream, and a slow boil drama that keeps you on edge for its full 125 minute running time because there is absolutely no guessing what is coming next.

9. Snowpiercer: Though incompetently marketed and abysmally underseen, Snowpiercer is an immediate dystopian classic. Visionary direction from Joon-ho Bong maximizes claustrophobic tension while brazen casting victories (Oh my God, Tilda Swinton!) and another solid lead turn from Chris Evens work together to create an enthralling allegory of the makers and the takers.

7. Only Lovers Left Alive: The great Jim Jarmusch (Ohio boy!) updates the vampire genre with a well conceived twist on the unusual, aided by Tilda Swinton and Tom Hiddleston’s wonderful performances as well as his own dry humor and magnificent eye for visuals.

6. The Grand Budapest Hotel: The great eccentric genius Wes Anderson inches his way closer to mainstream acceptance and Oscar with the most meticulously framed, wickedly clever dark comedy. Filled with melancholy and whimsy, full to bursting with fascinating cameos, and boasting an almost unimaginably perfect performance by Ralph Fiennes, it’s a work of genius that could spring only from the mind of Anderson.

5. Whiplash: As sure as J.K. Simmons will walk home with his first Oscar this year, Whiplash will astonish you. No film this year ratchets tension like this one, as one musician and his mentor do battle that makes the Hobbit look light hearted. Brilliantly written, expertly directed, and boasting two excellent performances (not to mention some really great music!), Whiplash is easily one of the best features of 2014.

4. Nightcrawler: No telling why it took so long to combine Network and American Psycho, but Nightcrawler is here now, so buckle down for a helluva ride. Jake Gyllenhaal is at his absolute best in a film that is as scorchingly relevant an image of modern media as it is a brilliant character study in psychosis.

3. Birdman: Meta-magical-realism at its finest, Alejandro Gonzales Inarritu’s look at the transience and transcendence of fame will nab some Oscars this season. This is a brilliant director and a magnificent cast at their playful, creative best.

2. Selma: Ava DuVernay’s account of the civil rights marches in Selma, Alabama doesn’t flinch. You can expect the kind of respectful approach common in historical biopics, but don’t let that lull you. This is not a laudable and forgettable historical art piece, and you’ll know that as you watch little girls descend a staircase within the first few minutes. Selma is a straightforward, well crafted punch to the gut.

1. Boyhood: Richard Linklater manages the impossible. By checking in on one family every year for 12 years, collecting not the major incidents but all those everyday moments, he provides an achingly, hilariously, touchingly realistic impression of an entire childhood. The cast is brilliant, and the sense of family they evoke is as authentic as anything you will ever see on film. Boyhood is a film like none other ever made, and it is imperative viewing.