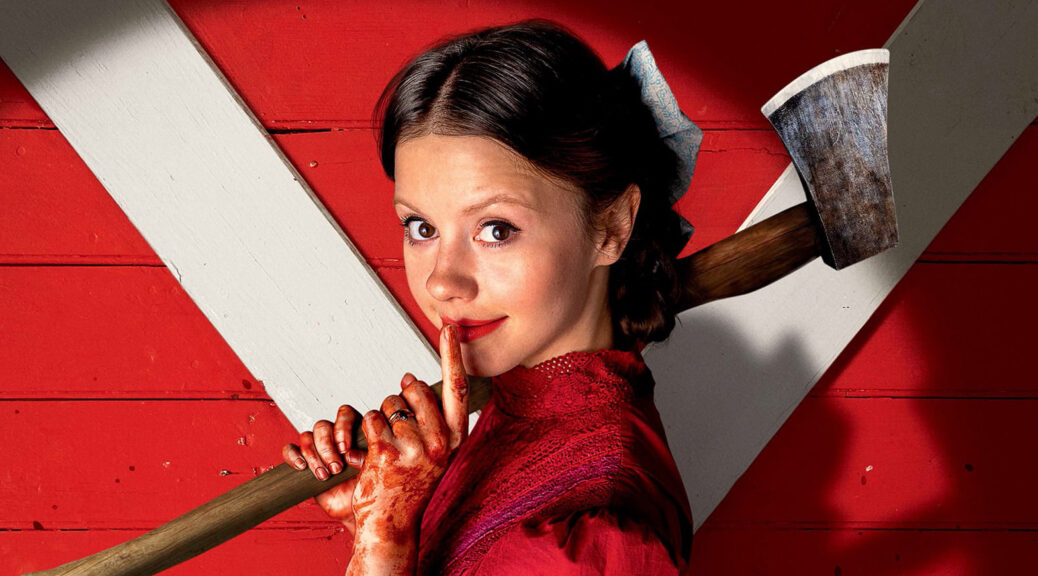 What a great year! So many horror films were both wonderful and huge box office successes, including Scream, Smile, The Black Phone and Barbarian.

Shudder hit another year out of the park with Good Madam, The Innocents, Speak No Evil, Slapface, Satan‘s Slaves: Communion, Mandrake, A Wounded Fawn and more. Plus the underseen and magnificent indies Men, You Won’t Be Alone, and Soft and Quiet still demand to be seen.

Maika Monroe is sensational as Julia, an actress who has left New York behind to follow husband Francis (Karl Glusman) and begin a new life in Bucharest.

Monroe emits an effectively fragile resolve. The absence of subtitles helps us relate to Julia immediately, and Monroe never squanders that sympathy, grounding the film at even the most questionably formulaic moments.

Mounting indignities create a subtle yet unmistakable nod to a culture that expects women to ignore their better judgment for the sake of being polite. Okuno envelopes Julia in male gazes that carry threats of varying degrees, all building to a bloody and damn satisfying crescendo.

Phil Tippett’s demons take center stage in his stop-motion head trip 30 years in the making, Mad God. It’s like a Bosch painting and a Tool video accusing each other of being too lighthearted.

Mad God delivers a nightmare vision like little else, overwhelming in its detail and scope. Tippett plumbs cycles of mindless cruelty.

Mad World revels in Tippett’s vulgar, potent fantasy without belaboring a clear plotline. The world itself resembles hell itself. Tippett peoples this landscape with figures and images that also feel reminiscent: a doll’s befouled face, a fiendish surgeon, a cloaked figure.

In 1996, Martin Bryant murdered 35 people, injuring another 23 in Port Arthur, Tasmania. The horror led to immediate gun reform in the nation, but director Justin Kurtzel is more interested in what came before than after.

7. Crimes of the Future

If that doesn’t sound like a David Cronenberg movie, nothing does.

The film references, directly or indirectly, The Brood, Dead Ringers, The Fly, Naked Lunch, Crash, and most frequently and obviously,  Videodrome. Like his main character, Cronenberg has long been an “artist of the inner landscape.” And after several decades of excising that tendency from his work, Cronenberg has come full circle to accept what was inside him all along.

In theaters and on VOD

The film follows Maren (an absorbing Taylor Russell, Waves), coming of age on the fringes of Reagan-era America. She meets and slowly falls for another outcast with similar tastes, Lee (Timothée Chalamet), and the two take to the road.

Given what the handsome young lovers have in common, you might expect a sort of meat lovers’ Badlands to follow. But Bones and All is less concerned with the carnage left in a wake than in what’s awakening in these characters themselves.

Bones and All is a tough one to categorize. I suppose it’s a horror film, a romance, and a road picture – not three labels you often find on the same movie. In Guadagnino’s hands, it’s more than that, though. He embraces the strength of the solid YA theme that you have to be who you are, no matter how ugly the world may tell you that is. You have to be you, bones and all. Finding Maren’s way to that epiphany is heartbreaking and bloody but heroic, too.

Mia Goth has been impressive in every film she’s graced. But nothing prepared us for Pearl.

With her first writing credit and her first no-question-about-it lead performance, Goth delivers an unerring combination of innocence and psychosis that is as captivating as it is terrifying.

The writing is sly and the direction a magically macabre take on classic American cinema, like the most wrong-headed Judy Garland movie you can imagine. But it comes together seamlessly to deliver a concoction spellbinding concoction.

Goth’s 8-minute monologue and that truly insane frozen smile over the end credits will stay with you forever.

Did you know that this is the 11th film in the Hellraiser franchise? There are 10 others, most of them terrible, a couple unwatchable. Why? How could it be so hard to create fresh horror from Clive Barker’s kinky treasure trove? David Bruckner had no trouble peeling the flesh from this franchise and exposing something raw and pulsing.

Jamie Clayton, with a massive thanks to makeup and costume, offers a glorious new image of pain. In fact, the creature design in this film surpasses anything we’ve seen in the previous ten installments, including Barker’s original. Each is a malevolent vision of elegance, gore and suffering, their attire seemingly made of their own flayed flesh.

Bruckner’s core themes replace the S&M leanings with trauma and addiction, following a young addict named Riley (Odessa A’zion) as she ruins everyone and everything she touches. The kinks may be gone, but the chains are still chilling, in a darkly beautiful world full of sensual, bloody delights to show you.

The filmmaker complicates every trope, all the one-dimensional victim/hero/villain ideas this genre and others feast on. Redemption doesn’t come easily to anyone. Pereda also seamlessly blends themes and ideas from across the genre, upending expectations but never skimping on brutal, visceral horror.

Filmmaker Ti West delivers an utterly unexpected and absolutely inspired horror show like nothing he’s made before. A group of good-natured pornographers descends upon an out-of-the-way ranch to shoot a movie, unbeknownst to the owners. Mia Goth leads a thoroughly entertaining cast, each actor making the most of the humor crackling throughout West’s script.

West explores some common themes, upending every one without ever betraying his clear love of this genre. Blending homages of plenty of Tobe Hooper films with a remarkable aesthetic instinct, West fills the screen with ghastly beauty.

Nope has plenty to say about Black cowboys, the arrogance of spectacle, and getting that elusive perfect shot. There are some truly frightening moments. Some revolve around things you may think you know based on the trailer. Others feature a bloody monkey in a party hat.

Peele’s direction and writing effortlessly mine comedic moments, but Nope is no comedy. He unravels a mystery before your eyes, and his shot-making has never been so on point. The way he splashes color and motion across this arid landscape is stunning. His visual cues—often executed with macabre humor and panache—amplify the film’s themes while inducing anxiety.

It feels a bit like Peele is saying that making a movie will kill you, if you’re lucky. But opening a film with a Biblical passage is no accident, and on a grander scale, Peele has crafted a genre-loving ode to a comeuppance tempted by grandiose delusions.