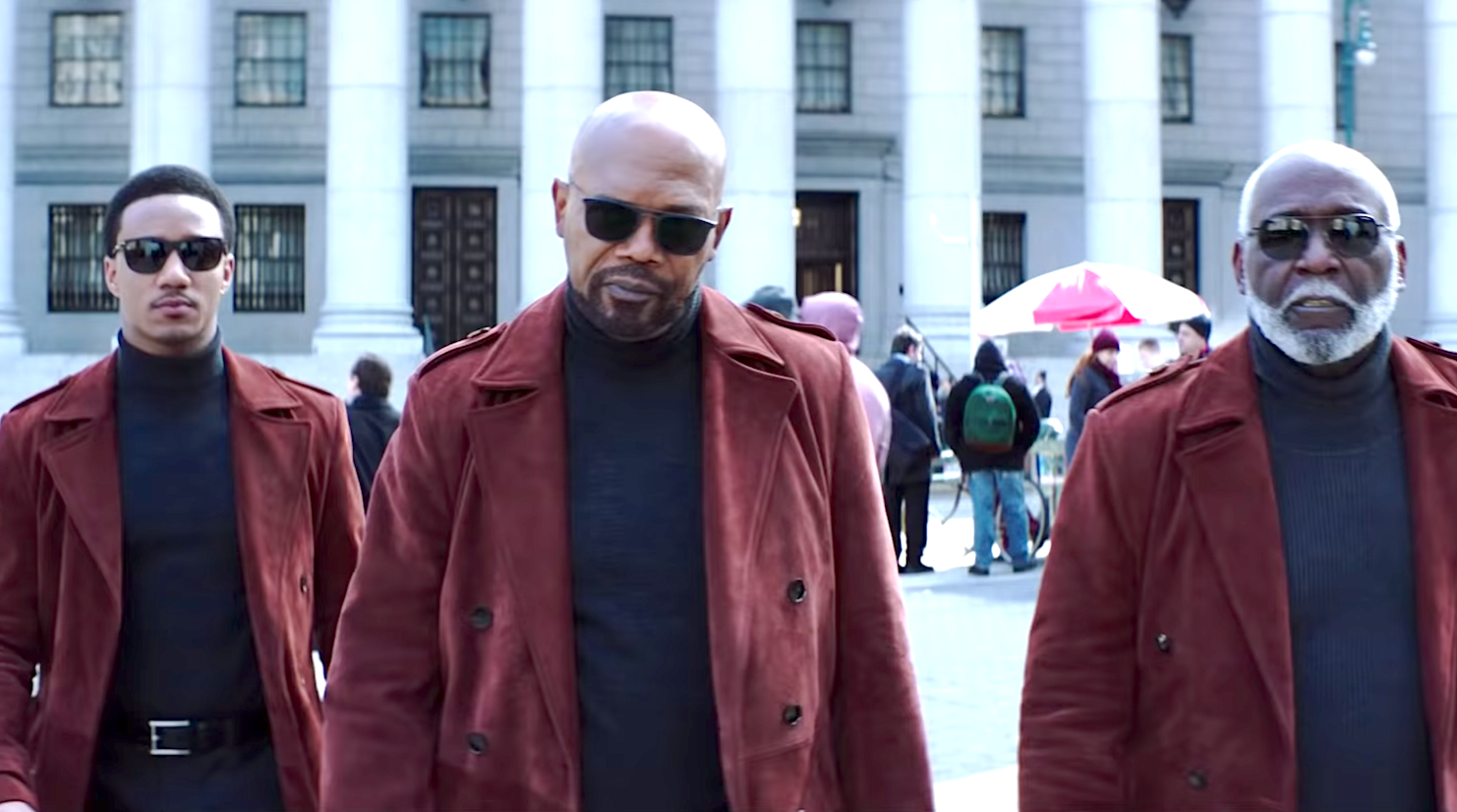 So, he’s a little different from Dad, then?

It’s the first clue that writers Kenya Barris and Alex Barrow and director Tim Story might have a sound plan to bring Shaft into the 21st century. They need one, because successfully transplanting those solidly 1970s sensibilities to present day is a bit of a trick.

The Brady Bunch Movie got around it by having the 90s Bradys still living gloriously 70s while everyone else called them weird. Genius move.

Taking much more of a straight up comedic approach than John Singleton’s 2000 sequel, this Shaft‘s culture clashes between John (Samuel L. Jackson) and JJ (Jessie T. Usher) offer some amusingly organic attempts to freshen the air of misogyny and homophobia.

It’s not a bad strategy, but the dam can only be held back so long. Guys, quit being such pansies. Women like real men who only want sex, guns, and any chance to kill people!

And then there’s the matter of the unintentional comedy.

JJ is a data analyst at the FBI who’s also apparently a hacking genius: “This is the most advanced encryption I’ve ever seen…I’m in!” He drags Pops into a completely ridiculous drug case where the clues come easy and the henchman stand straight up in every line of fire while explaining their motivations for giving chase (“It’s that Shaft kid! He saw everything!”)

Is Jackson a wonderful badass who’s perfect for this? Duh.

Does Regina Hall (as JJ’s mother) brighten every scene she’s in? She always does.

Do the samples of Isaac Hayes’s original music remind it’s probably the greatest theme in movie history? You damn right!

There are fun elements here, but the lazy execution never fully commits to the promising setup. Shaft’s early self-awareness ends up devolving into self-parody and sadly, I cannot dig that.

Maybe you’ve heard the claim that, back in the 80s, pop balladeers Air Supply could in fact “make all the stadiums rock.”

But did they really?

Hard to say, as we never got that live footage which may have provided the elusive evidence of the Supply, a stadium and that aforementioned rocking.

Such unanswered questions will not haunt Kevin Hart. What Now? takes us to Lincoln Financial Field in Philadelphia, where in August of last year Hart sold out his hometown stadium for a standup routine featuring rock concert ambitions. A football stadium sold out for a comedy show. Impressive, and though Hart’s third concert film takes a little time to hit its stride, it eventually delivers steady and sometimes gut-busting laughs.

As with 2011’s Laugh at My Pain and 2013’s Let Me Explain, What Now? buffers the standup with additional footage directed by Hart favorite Tim Story (Think Like a Man, both Ride Along films). The opening checks in with Hart some three hours before showtime and mixes parodies of both 007 and The Equalizer (Denzel version) that rate more clever than funny, earning bonus entertainment points courtesy of cameos from Halle Berry, Don Cheadle and Ed Helms.

Once Hart trades his tux for leather and hits the stage, Leslie Small takes the director’s chair, leaning a bit too heavily on quick cuts and overly manipulative audience reaction shots. I get it, there’s only one performer to frame and you’d like to avoid ninety minutes of Chris Rock-style stage stalking, but letting Hart’s set, adorned as it is with jumbo video screens and changing backgrounds, breath a bit would better feed an in-the-moment atmosphere.

The film, like its star, is always likeable, consistently funny and sometimes hilarious. Now that Kevin Hart has rocked a stadium harder than Air Supply, What Now? answers one question while it’s asking another.