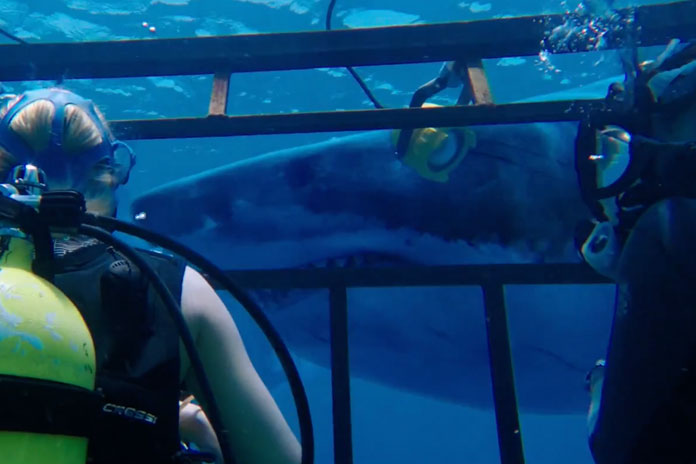 Is it Shark Week?

If it isn’t, why the hell not?

There’s a new shark attack movie in theaters this weekend. It’s no Jaws, but it’s no Sharknado, either. Johannes Roberts’s 47 Meters Down treads some similar waters as last year’s surprise hit The Shallows, with a little less intelligence and a lot more sharks.

Lisa (Mandy Moore) and Kate (Claire Holt) are sisters on vacation in Mexico. Lisa, the play-it-safe older sister, is nursing a heartbreak, which loose cannon Kate hopes to heal via the worst imaginable decisions. Like a shark cage expedition.

Cage goes in the water.

Sharks in the water.

Because tourists are stupid.

How stupid? Sea Captain Taylor (Matthew Modine) has to repeatedly say, “Stay inside the cage.”

But, if you can get past the idiocy – or even embrace it because, if YouTube is to be believed at all, people really are just this moronic – you’ll find some fun jump scares and genuine tension.

Something goes wrong and the girls and their cage drop to the sea floor, a dangerous 47 meters down. They have little oxygen and they’re surrounded by sharks. How will they survive?

The Shallows basically created the Girl Power Shark Movie, and Roberts and co-scripter Ernest Riera end up playing out a far less empowering tale. Roberts’s background is horror, though, so he does know how to deliver some visceral action now and again.

Plus, there is one shot that’s almost worth the price of admission.

Atmosphere is Roberts’s talent, and he creates a good deal of it. Aided by impressive CGI, the sisters’ plight on the ocean floor is often nearly as breathless for the audience as it is for the characters.

Dialog, on the other hand, is definitely a weaker point. Pair the banalities of the conversations with the contrivances that put the characters where they are, then add a first act that’s weighed down with cartoonishly ridiculous choices, and the cool shark sequences have a lot to overcome.

For a mindless, squirmy summer shark fest, though, it’s a fun time-waster.