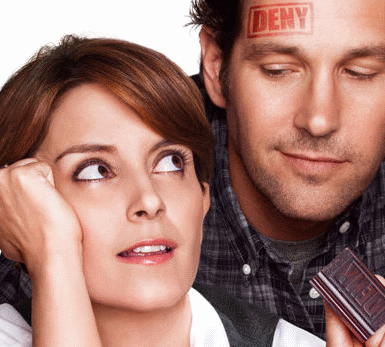 The idea of pairing Tina Fey and Paul Rudd is very appealing. They are funny, smart and talented – and yet so often willing to take soft-boiled parts where they play socially awkward cutie pies. Like, for instance, Admission.

Fey plays Portia, a buttoned-up Princeton admissions counselor looking for happiness in a hum drum life inside the ivory tower. Rudd’s John, on the other hand, is an impetuous free spirit currently serving the youth of the world as an alternative school teacher.

Both of these misguided adults decide to help one unusual teen get into Princeton in this good hearted, underwhelming comedy about parents and children and the damage we do to each other.

Of course, Portia and John fall for each other, Portia comes to terms with her ambition and her mother (a scene-stealing Lily Tomlin), John realizes fatherhood requires some sacrifice, and lessons are learned just all over the place. Sounds hilarious, doesn’t it?

Nope. Funny is not the word to describe Admission.  And that’s a crime, really. Wasting comic talents like Rudd and Fey should come with consequences.

Director Paul Weitz knows how to orchestrate a smart comedy, having helmed flicks from the raucous American Pie to the complex About a Boy to the wizened American Dreamz. Unfortunately, he cannot find his rhythm here.

Karen Croner seems a likely culprit. The screenwriter had never written a comedy before and frankly, still hasn’t. Working from the novel by Jean Hanff Korelitz, Croner is content to embed flat one liners into a laid back comment on finding true happiness in age old family values.

Side plots abound, each meant to create humiliating moments of comic gold for Fey. Unfortunately, every zany tale – whether with an ex-boyfriend (an underused Michael Sheen), an office rival (Gloria Reuben), or a ferocious mother – goes nowhere.

Fey overworks the “frazzled woman pretending to have it all together” bit, trying too hard to generate energy and chuckles in scenes without potential. A charming, warm Rudd is nothing if not likeable, but he, too, suffers from an absence of opportunity to draw more than a few fond smiles.

Very little works in this toothless comedy that has courage enough to avoid a tidy ending, yet still falls back on an almost offensively traditional image of happiness, one that requires roots, a man, a woman, and a child.