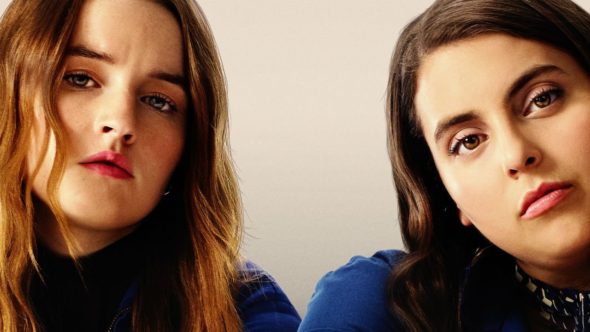 Every generation has its pivotal high school graduation film: Superbad, Say Anything, 10 Things I Hate About You, Grease, High School Musical 3.

I mean, not all of them can be classics. Making her feature debut behind the camera, Olivia Wilde hopes to join the ranks of the classics with her smart, funny, raunchy yet quite loving tale of two besties preparing to go their separate ways, Booksmart.

Amy (Kaitlyn Denver) and Molly (Beanie Feldstein) approach the last day of high school with a certain earned swagger. Both have been accepted into the Ivy League by dedicating their previous four years to little more than study and each other.

And every other soon-to-be graduate? As Molly’s morning ritual self-help tape says, fuck them in their fucking faces.

So, this movie is very definitely R-rated, FYI. But it never loses a sweet silliness, rooting its episodic adventures in a believable bond between two true talents.

The catalyst for their one wild night? Molly realizes at the last possible minute that her classmates all seem destined for just as much post-high school greatness as she, and they also managed to have fun. They had it all, while she had only study and Amy.

And there is just one night left to rectify that wrong.

From a script penned by four (Susanna Fogel, Emily Halpern, Sarah Haskins and Katie Silberman), Wilde spins a female-centric story without abandoning the fun, the idiocy or the laughs you hope to find in this very specific kind of film.

Wilde’s confident direction leans on her leads’ chemistry to drive what could otherwise be a string of sketches. Instead, taken together they provide a riot of color, laughter and misadventure that celebrates sisterhood.

She and her leads are helped immeasurably by one of the strongest casts assembled for a teen party movie. Billie Lourde (Carrie Fisher’s daughter) steals every scene she’s in. Meanwhile Skyler Gisondo and Molly Gordon are both very solid while adults Jason Sudeikis, Will Forte, Lisa Kudrow and Jessica Williams all deliver in small roles.

Some of the bits—Williams’s teacher trajectory, in particular—feel too random, an overall tone that occasionally threatens the narrative. But Wilde’s instinct to keep each situation invested more in the friendship than the sketch pays off.

There are definite missteps. For as much thoughtfulness as the film directs toward the emotional longing of its lesbian protagonist Amy, the movie’s gay male characters are exaggerated stereotypes. Disappointing.

Comparisons to Superbad are unavoidable, particularly since Feldstein’s brother Jonah Hill starred in Greg Mottola’s 2007 high water mark. And while Booksmart may not quite hit that target, Wilde’s comedy is the most fun flick to join the party since McLovin and the Lube.