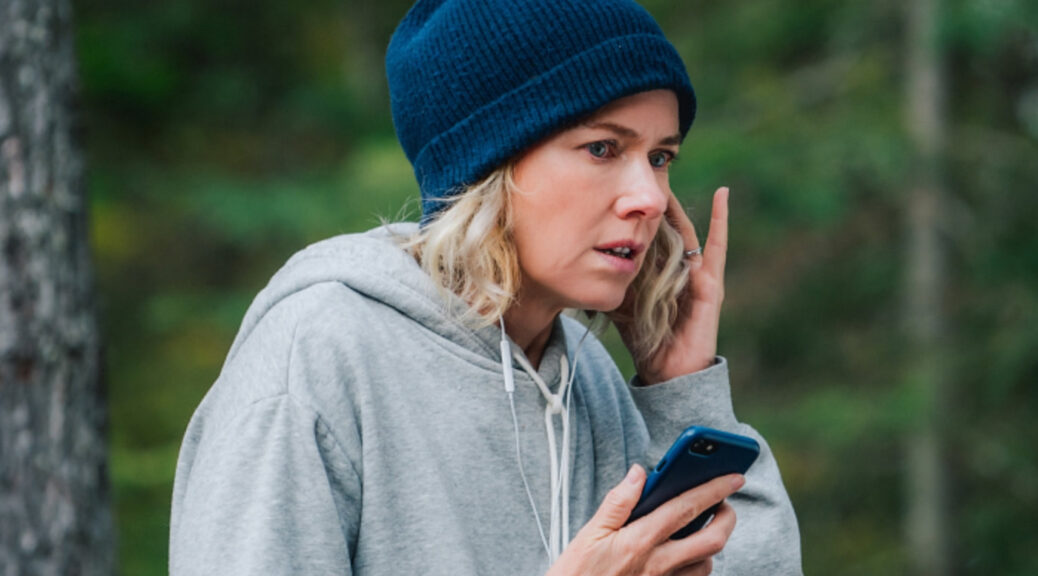 With a main character spending most of the film alone, interacting with other characters only through a cell phone, The Desperate Hour (previously titled Lakewood) has the look of a production born out of quarantine.

But writer Chris Sparling is just returning to his framework for Buried from 12 twelve years ago, and tweaking the specifics with some sadly recognizable plot points.

Naomi Watts is Amy, a suburban mom who’s taken a personal day off from work as the anniversary of her husband’s fatal car accident approaches. Amy sets off on a long jog to clear her head, and as she winds deeper through the wooded area surrounding her neighborhood, multiple police sirens give the fist clue that another tragedy has occurred.

There’s a shooter at her son Noah’s (Colton Gobbo) high school, the area is on lockdown, and the police want to know if Amy keeps any guns in the house.

It’s difficult to overstate how quickly this premise would collapse with a lesser talent than Watts in the lead. She’s emoting with a smart phone and voice actors, but damned if she doesn’t make Amy’s desperation downright palpable, subtly conveying the chilling realization that a uniquely American epidemic is no longer happening somewhere else.

As the real time ticks by, though, the organic tension gives way to increased contrivance and emotional string pulling more befitting a TV movie-of-the-week. And with a mid-credits epilogue that is well-meaning but simplistic and preachy, the final minutes of The Desperate Hour comes dangerously close to undercutting the seriousness of the film’s intentions.

But there’s no doubting Watts. It is her commitment that won’t let us turn away from Amy, or completely give up on this film.