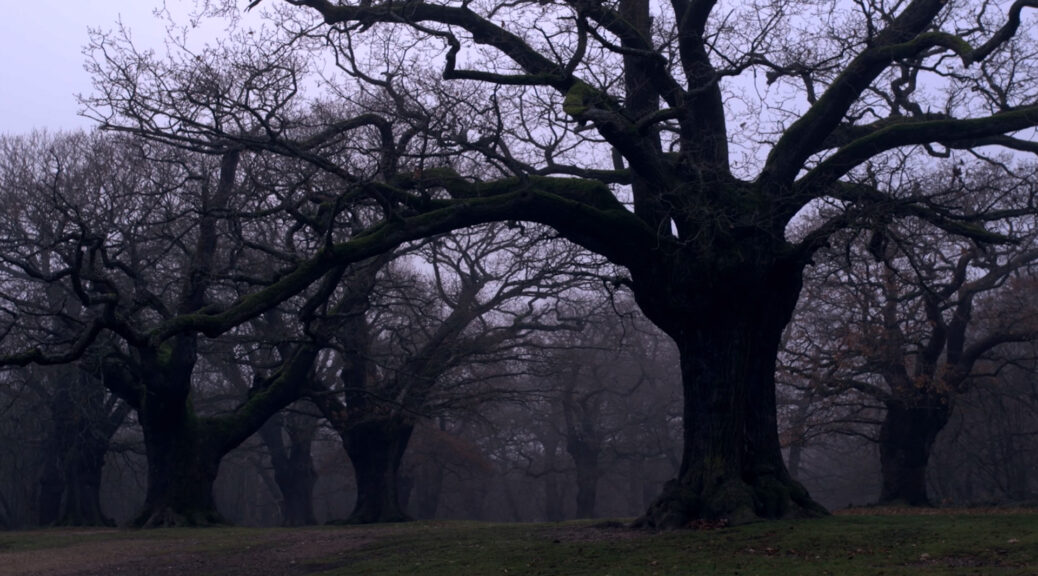 Sideworld: The Haunted Forests of England

Jonathan Russell and George Popov have been exploring England’s haunted history for a number of years now. For their first feature collaboration, 2017’s Hex, the co-writers/co-directors took us into the woods for a spell.

In 2020 the pair co-wrote – this time with Popov flying solo behind the camera – a modern exploration of folk horror with The Droving. Once again, the two unveiled a spooky history where primitive behavior meets supernatural forces deep in England’s woods.

The filmmakers’ latest suggests a serious preoccupation at this point. Their documentary Sideworld: The Haunted Forests of England walks us through some of the spectral history that likely influenced their earlier dramatic efforts.

Where Kier-La Janisse’s recent doc Woodlands Dark and Days Bewitched dove into dramatic recreations of folk horror, Popov and Russell dig into the myths that inspired the fiction.

They don’t stop with musty legend, though. Links to contemporary crime help to bridge the modern with the ancient in a way that sheds light into how tales of hauntings originate.

Though Popov narrates most of the film, he’s joined on occasion by Suzie Frances Garton and William Poulter. The film would have benefitted from more vocal variety, particularly since the filmmakers avoid any kind of talking-head footage. A little commentary from folklorists or experts would also have helped the film deliver a bit more relevance.

You can’t fault the spell Sideworld casts. Richard Suckling, who did such a beautiful job as DP for The Droving, again develops an atmosphere of beauty and dread. His cinematography mesmerizes from the opening moment. Paired with Matthew Laming’s haunting, whispering whistle of a score, the forests of Popov’s exploration easily convince of spectral menace. 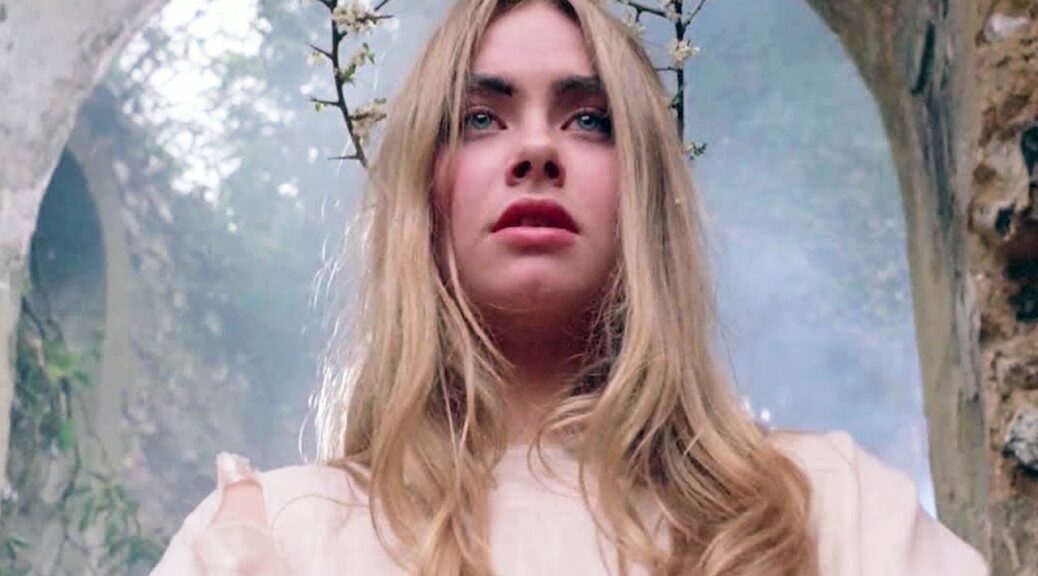 Woodlands Dark and Days Bewitched: A History of Folk Horror

Every so often you come across a movie and think it must have been made specifically for you. In my case, that film is Kier-La Janisse’s 3-hour documentary Woodlands Dark and Days Bewitched: A History of Folk Horror.

Dividing her topic into chapters, Janisse portions out information theme by theme. And while this essay-style documentation is driven by expert commentary, the filmmaker surrounds the scholarly material with beguiling imagery.

Every chapter has its own look and feel, each one opening with an appropriately bewitching bit of rhyme. Then it leads you through a clearly articulated and fairly comprehensive examination of certain moments in folk horror. Janisse opens on the big three, The Unholy Trinity–Blood on Satan’s Claw, Witchfinder General and The Wicker Man—as a way to ease us into the conversation by pinning major themes on well-known films.

She goes on to explore TV and written tales tangentially, though her focus is always primarily on film, taking us from The Wicker Man through Midsommar. In between, she introduces dozens of underseen films and traces not only the history of folk horror but the societal anxieties that these films represent.

And while many may think mainly of British films of the 1960s and 70s for this category, Janisse presents an intriguing global history that unveils universal primal preoccupations from England to Argentina, the US to Lapland and beyond.

Bonus: You can find a gorgeous array of folk horror streaming on Shudder this month, including The Wicker Man, Blood on Satan’s Claw and Witchfinder General.

There are so many, you can’t blame even a 3-hour film for leaving some out. Here are a few masterpieces glimpsed but not discussed and well worth your time:

And even then, there are some favorites not discussed at all that you might want to check out:

How can three hours of folk horror discussion not be enough? It’s a question that points to what may be the greatest strength of Janisse’s film. Like any truly strong documentary, her film not only covers its topic comprehensively, it inspires you to dig deeper on your own time.

Leap of Faith: William Friedkin on The Exorcist

Most of the time, limiting a documentary to only one point of view is not a winning strategy. You want balance, with a scope wide enough to deliver more than just an agenda-laden screed.

Leap of Faith doesn’t worry about all that. If your aim is to take a deep dive into the filming of The Exorcist, and director William Friedkin agrees to a lengthy interview, well, that’s that.

Sure, you could probably find someone to argue Friedkin didn’t craft one of the greatest horror films in history, but do we really need to give idiots any more screen time this year?

In just the last three years, director Alexandre O. Phillippe has deconstructed horror classics Alien (Memory: The Origins of Alien) and Psycho (78/52: Hitchcock’s Shower Scene) to fascinating effect. Leap of Faith makes it a trifecta of terror, thanks to a film icon who also proves himself an endlessly engaging storyteller in front of the camera.

If it’s true every interview needs at least one good story to be worth the time, Phillippe’s visit with Friedkin is a pound for pound champ. The stories here – from Jason Miller taking the Father Karras role away from Stacy Keach to Friedkin’s battle with legendary composer Bernard Herrman over the score – keep you hanging on every word.

Strangely, though, the conversation never does get around to Linda Blair at all – not her casting, her performance, or the complexities of directing a teenage actress in such extreme subject matter. Even with all the compelling content here, it’s a noticeable omission.

But more than an indispensable guide through the making of a classic, Leap of Faith shines a wonderfully illuminating light on Friedkin’s creative process. Yes, Billy clearly likes him some Billy, but at 85 years old now, it’s hard to blame him.

Whether or not Phillippe knew what he was getting when first he sat down with Friedkin, the game plan no doubt materialized pretty quickly. Keep him talking, trim the fat, and then splice in the appropriate clips at the perfect time.

Leap of Faith might be a one man show, but when the show is The Exorcist and the man is William Friedkin, it feels like enough. 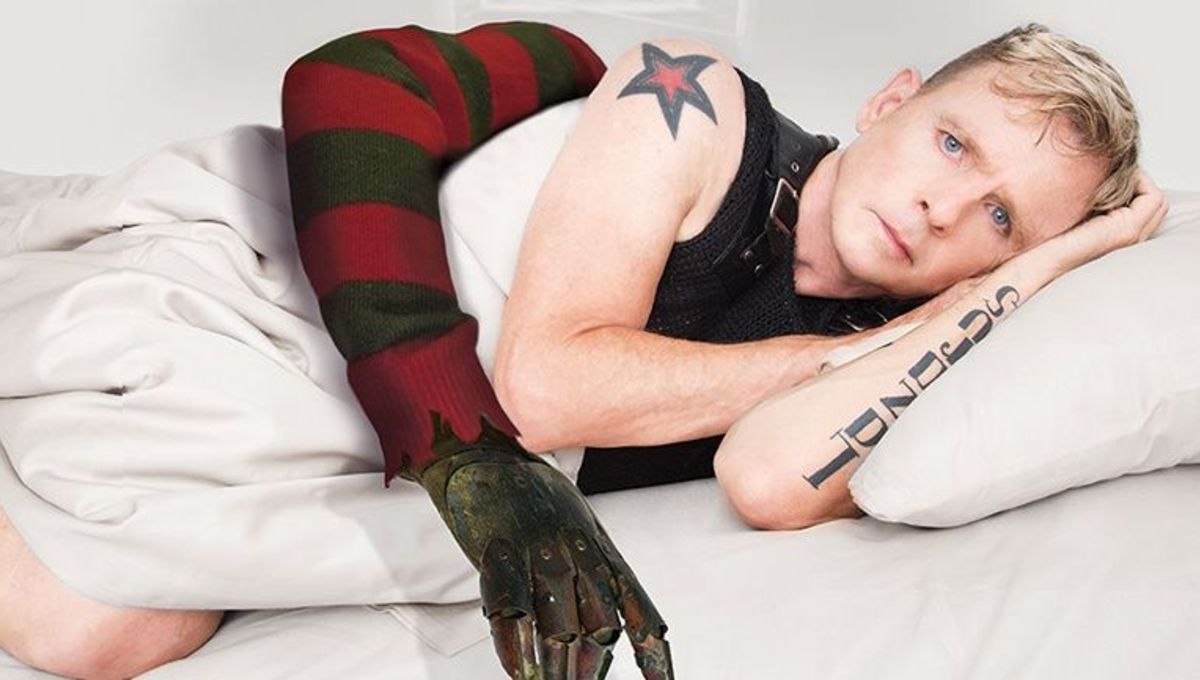