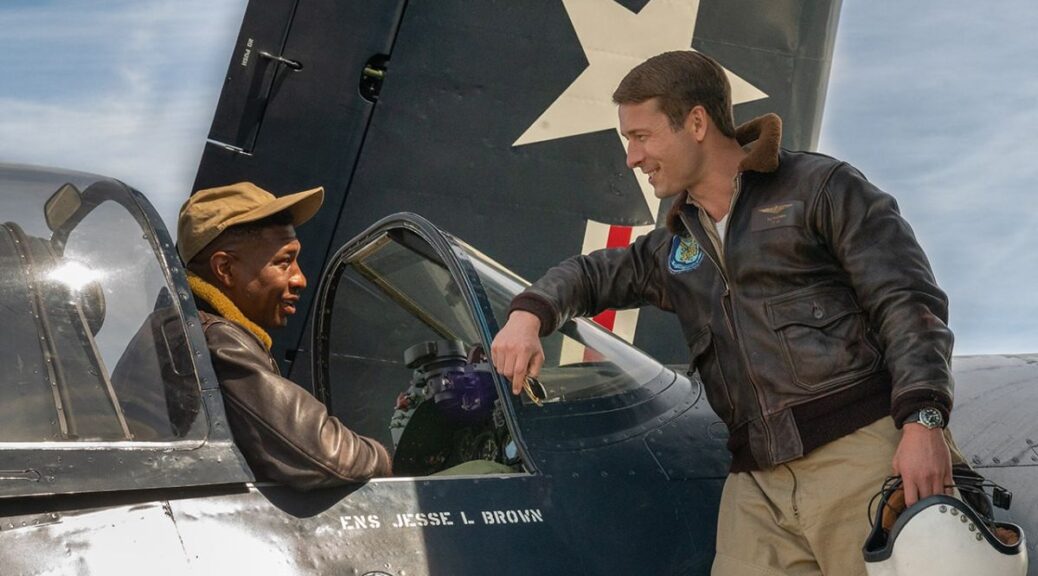 Both the title and the trailer hint at a formulaic, button-pushing war movie. Heck, seeing Glen Powell back in a cockpit might have Top Gun: Maverick fans hoping for a slice of Hangman’s family backstory.

Happily, neither pans out. Devotion does offer some thrilling air maneuvers, but reaches even greater heights with an inspiring, true-life account of two friends in a “forgotten war.”

Director J.D. Dillard (Sleight)and screenwriters Jake Crane and Jonathan Stewart bring hard truths and humanity to their adaptation of Adam Makos’s book detailing the bond between airmen on the eve of the Korean War.

Ensign Jesse Brown (Jonathan Majors) is the Navy’s first African American aviator. Lt. Tom Hudner (Powell), the “new guy,” is assigned to be his wingman. When Squadron 32 gets airborne, Dillard and cinematographer Erik Messerschmidt deliver the gripping goods. But away from the runway, two sterling performances and an understated script enable the film to bypass most of the usual cliches for an effective look at struggle, sacrifice and the need for true allies in the fight for equality.

Majors is so good, delivering his best work since The Last Black Man in San Francisco. His commanding physical presence comes easily, but the way Majors conveys the soul-deep pain beneath Jesse’s strong silence is never less than moving.

Powell is an impressive wingman here, as well, as a man of privilege who can’t ignore the contradictions between Jesse’s service and the treatment he so often endures.

So come for the aerial dogfights, you won’t be disappointed. But Devotion also serves up something special on the ground, and that’s worth saluting.