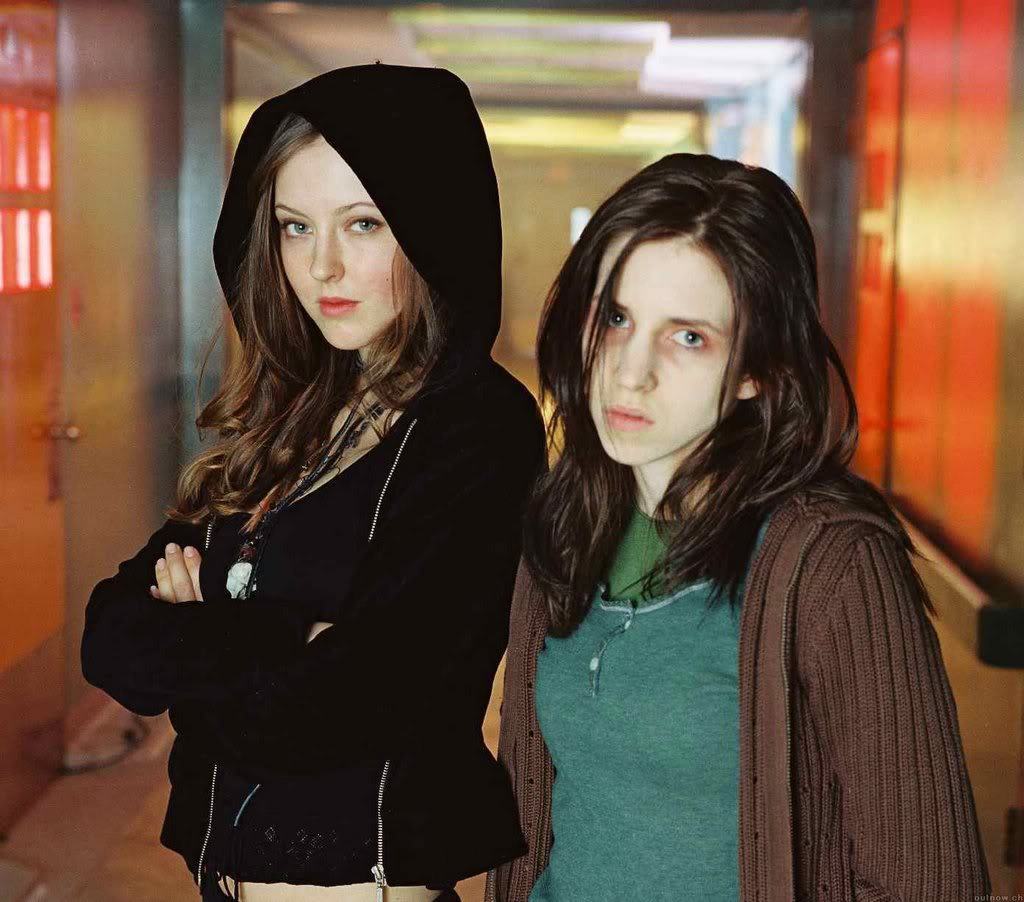 Only Women Bleed? Sunday Bloody Sunday? Let It Bleed? What song would we have chosen to open the new podcast? There are more possibilities than we might have imagined—in song and in film—as we celebrate the monthly curse with a talk about the best horror movies concerning menstruation. Do you have the stones to listen?

We open with some impressive aerial shots of the smoking, neon ruin of the Las Vegas strip. Cut to another gorgeous aerial of a sports car zipping up a desert highway. In it, a couple of coked-up strip club lowlifes, Molly (Brittany Allen) and Nick (Merwin Mondesir), are escaping to an airfield where they’ll meet with other lowlifes and head to an island off Mexico.

Naturally, this isn’t going to work out. But what co-writer/director Colin Minihan has in store will surprise you. He’s made a couple of fine choices with his film. The point of view character is not only an unlikely protagonist – an unpleasant thug with a drug habit – but she’s also female.

Soon the car goes off the road and one meathead catches her scent, and suddenly Molly’s stripper shoes are not her biggest problem as she faces a 30-mile trek across the desert to the airfield.

What develops is an often fascinating, slow moving but relentless chase as well as a character study. With a protagonist on a perilous journey toward redemption, It Stains the Sands Red takes a structure generally reserved for the man who needs to rediscover his inner manhood and tells a very female story.

Very female. Menstruation and everything.

Writer/director Jee-woon Kim (I Saw the Devil) spins a hypnotic tale of family and ghosts—both literal and metaphorical. Tale of Two Sisters is a deep, murky and intensely female horror.

A tight-lipped father returns home with his daughter after her prolonged hospital stay. Her sister has missed her; her stepmother has not. Or so it all would seem, although jealousy, dream sequences, ghosts, a nonlinear timeframe and confused identity keep you from ever fully articulating what is going on. The film takes on an unreliable point of view, subverting expectations and keeping the audience off balance. But that’s just one of the reasons it works.

No line of dialog, no visual is wasted. The seemingly simple moment of one daughter needing to borrow a feminine product from her stepmother works in a dozen ways: to introduce blended identities, to exacerbate the uncomfortable familiarity, to foreshadow future horror.

Tale masters the slow reveal in large and small ways. Whether you’ve begun to unravel the big mystery or not, Tale always has something else up its sleeve. Or, under its table.

Outcast Pauline (a very committed AnnaLynne McCord) is a budding surgeon. She’s not much of a student, actually, but she does have an affinity for anatomy. Especially blood. Pauline really, really likes blood.

A horror film focused on an adolescent girl as antihero is likely to involve 1) menstruation, 2) a mom. Excision is no different. Well, it is a little different.

The mom is Traci Lords, in what is certainly her most assured dramatic performance. Her arc is interesting: overbearing and cold and, eventually, probably correct in her unfavorable assessment of her eldest girl.

Writer/director Richard Bates, Jr. takes more of an unusual course when bringing in Pauline’s cycle, though. I’m not sure we’ve seen it handled quite like this before, although to be fair, it’s definitely in keeping with the peculiar and beautifully realized character he and McCord have created.

Walton’s wickedly humorous script stays in your face with the metaphors, successfully building an entire film on clever turns of phrase, puns and analogies, stirring up the kind of hysteria that surrounds puberty, sex, reputations, body hair and one’s own helplessness to these very elements. It’s as insightful a high school horror film as you’ll find, peppered equally with dark humor and gore.

What else? Nobody did moms, the pain of adolescence, the horror of the onslaught of womanhood, or period quite like Brian De Palma’s 1976 original. Is there a more tragic scene? Is there a scene that better establishes a character, a context or horror?

De Palma films the scene in question, appropriately enough, like a tampon commercial, all cheese cloth and beautific music. And then Carrie White (Oscar nominated Sissy Spacek) desperately claws at her classmates, believing she is dying. It’s the most authentic image of vulnerability and terror you can imagine, matched in its horror by the reaction she receives from those she seeks: laughter, mockery and contempt.

Beyond the epitome of adolescent mortification that the scene represents, it also clarifies the unspoken relationship between Carrie and her as-of-yet unintroduced mother, who has never told her teenaged daughter that this was coming.

The result is the ultimate in mean girl cinema and an introduction to a nearly perfect horror film.