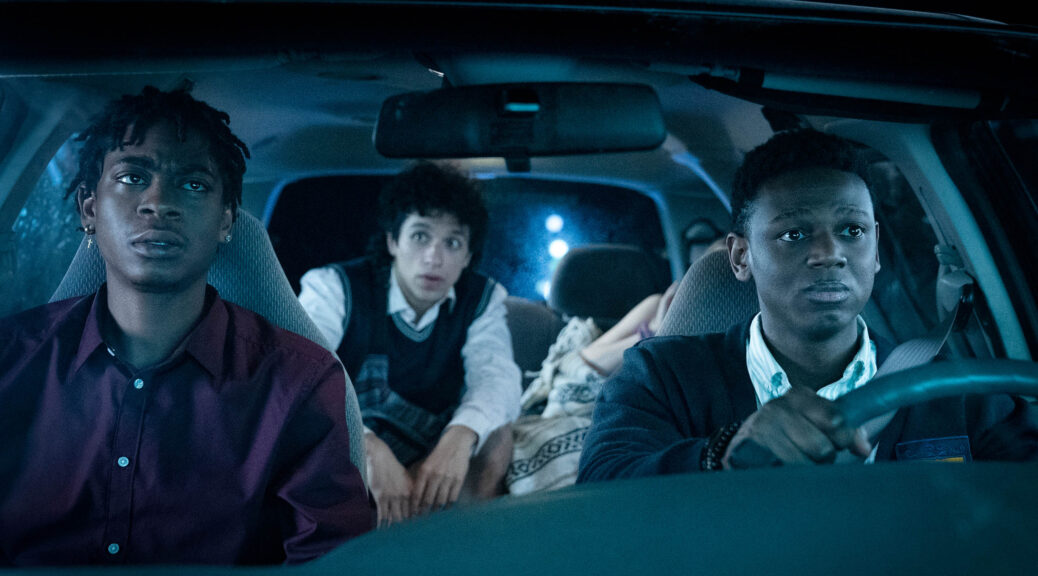 Take two longtime friends on the verge of going their separate ways, and throw in one night of epic partying before they graduate. There will be hijinks, conflict, feelings expressed, and resolution.

We know this formula, right?

Not so fast. Expanding their Emergency short from 2018, director Carey Williams and writer K.D. Dávila run those familiar tropes through a tense, in-the-moment lens that upends convention while still delivering a consistent layer of laughter.

Sean (RJ Cyler from Power Rangers and The Harder They Fall) and Kunle (Donald Elise Watkins, Black Box and The Underground Railroad) have two months until they graduate Buchanan college. Their plan is to make history by becoming the first Black men to complete Buchanan’s Legendary Party Tour. They’ve managed to score all seven necessary invites, but a complication arises.

There’s a passed-out underage white girl in their living room.

Kunle’s instinct is to call 911, but Sean quickly reminds him that Black folks have been shot for far less than what it might appear is going on.

And so the two friends decide to deal with the situation themselves, adding their pal Carlos (Sebastian Chacon) to the plan while the unconscious girl’s sister (Sabrina Carpenter) and two of her friends stay in pursuit via phone tracking.

Williams does a masterful job juggling tones. Early on, the terrific performances from Cyler and Watkins get us invested in the friendship before Williams increases the pressure. He’s able to blend some terrifying dread into the ridiculous nature of the situation with a quiet confidence that deepens the real-world stakes.

Dávila, fresh off writing the Oscar-nominated short Please Hold, again mines law enforcement anxieties with deft precision. Her transition to a feature-length screenplay is seamless, sharpening the narrative with clever, organic plot turns and the characters with authentically grounded humor.

From clueless white allies to the distance between “Black excellence” and “thug,” Emergency covers plenty of socially conscious ground. And though a beat or two may seem less than subtle, the film never panders.

So we get the two friends ready to explore the future, searching for their place in the world. But this wild night of partying holds more sobering lessons than we’re used to seeing.

For these young men, it’s about how quickly their perception of the world can change forever, and the unrelenting weight of navigating how the world sees them.