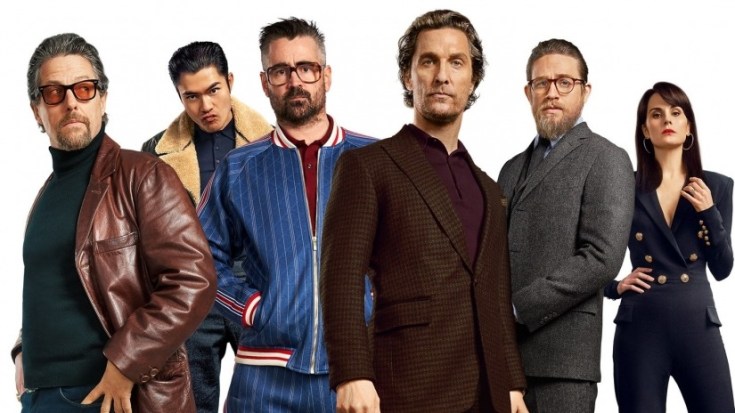 If nothing else, Guy Ritchie and his Gentlemen are not lacking in self-confidence. This is a film, and a filmmaker, anxious to prove the old guys can still cut it, and that any young upstart who thinks otherwise has a painful lesson coming.

Ritchie returns to the testosterone-laden, subtitle-needin’ bloody British gangster comedy terrain of Snatch and Lock, Stock and Two Smoking Barrels – the early films that still define him – for a stylish ride through a violent jungle with a man who’s not sure he still wants to be King.

Matthew McConaughey is Mickey Pearson, an American Rhodes Scholar who put his brains to work in the drug trade, utilizing a string of expansive British estates to build an underground network that controls the supply of “bush” aka “supercheese” aka weed.

But now it seems he’s ready for a quiet life of leisure with wife Roz (Michelle Dockery), and offers to sell his entire operation to brilliant criminal nerd Matthew (Jeremy Strong) for a sizable sum.

As Matthew is mulling, Roz smells “fuckery afoot,” and she smells wisely.

There’s plenty, and a PI named Fletcher (Hugh Grant) thinks he has it all figured out, so much so that he visits Ray (Charlie Hunnam), Mickey’s number two, with an offer to save Mickey’s hide…in exchange for a hefty fee.

Ya follow? There’s plenty more, and it’s all spelled out via the screenplay Fletcher has conveniently written. As Fletcher joyously outlines the plot to Ray (and us) over scotches and steaks, Ritchie uses the device to play with possible threads, backtrack, and start again.

The Gentlemen is not just meta. As the double crosses and corpses mount, it becomes shamelessly meta, a sometimes engaging, other times tiresome romp buoyed by slick visual style and committed performances (especially Grant and Hunnam), but marred by self-satisfaction and stale humor that might have been less tone deaf a decade ago.

You get the feeling that after a marriage to Madonna and some big Hollywood franchise films (Sherlock Homes, Aladdin), Ritchie is out to prove he hasn’t gone soft with a little raucous, chest-beating fun.

But while The Gentlemen does show Ritchie’s way with a camera can still be impressive, its best parts only add up to a fraction of their promise.