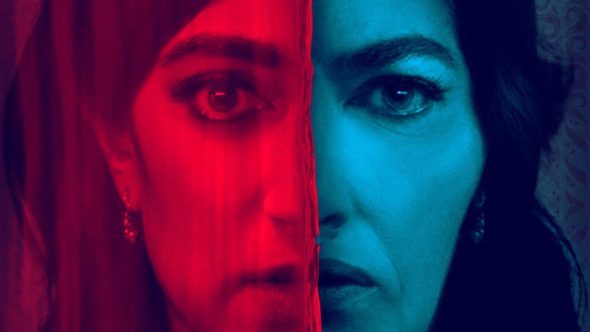 Though they live in different countries, Usha (Sarita Choudhury) and her daughter Pallavi (Sunita Mani) talk often, and Mom always seems to have two main things on her mind.

Does Pallavi have a boyfriend yet? And is she remembering to wear her “evil eye” bracelet?

It’s been years since Usha and her husband left the U.S. for their native India, as Pallavi stayed behind with aspirations of writing a novel. Now, as her very American daughter nears thirty, the traditional Usha is getting impatient for a wedding, and trusts in the bracelet to protect Pallavi against any evil spirits preventing her from marriage.

So, when Pallavi begins a serious relationship with the dashing Sandeep (Omar Maskati), she is shocked when Mom objects, and strenuously.

You’d object, too, if you believed your daughter was dating a reincarnation of the abusive boyfriend who tried to kill you three decades before.

Originally a best-selling Audible original, Evil Eye is directors Elan and Rajeev Dassani’s contribution to Amazon’s Welcome to the Blumhouse series. With an adapted script from source author Madhuri Shekar, the film lands as a delightfully cultured mystery. As narrative layers develop, the atmosphere is more supernatural thriller than outright horror show.

Plot turns tend to rely on convenience and in the absence of any sustained tension or outright fear, the real draw becomes the mother/daughter dynamic propelled by the two lead performances.

The veteran Choudhury makes Usha a fascinating conundrum, haunted by her past, fearing for her daughter’s future and forced to question some beliefs she’s long held dear. When the script wavers, Choudhury elevates it, selling every moment with conviction.

Mani, an up-and-comer seen in Glow and the current Save Yourselves!, provides the effective contrast. Pallavi’s modern path is, at first, only mildly affected by her mother’s traditional sensibilities. But when Usha comes west to present her concerns in person, Pallavi must confront her own inner turmoil.

By the time the final twist is revealed, you’ll most likely have already guessed it. But what you’ll remember about Evil Eye has little to do with the mysterious occurrences surrounding this mother and daughter. It’s the humanity flowing between them that sticks.