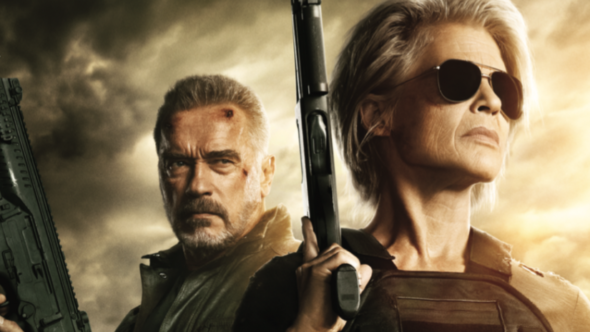 I know it’s sounds about as insightful as “feel good movie of the year,” but Dark Fate really is the Terminator sequel we’ve been waiting for. Its fast- paced and thrilling, surprisingly funny, and manages to honor our investment in two classic characters while it carves out a damn fine blueprint for updating a warhorse.

After re-connecting us with T2: Judgment Day via some crazy good de-aging technology that apparently wasn’t shared with Gemini Man, Dark Fate gives us a future savior that must be protected.

She’s Dani (Natalia Reyes from Birds of Passage), a Mexico City factory worker being hunted by the latest and greatest Terminator, the Rev 9 (Gabriel Luna). But Dani has Grace (Tully‘s Mackenzie Davis, terrific), an “augmented” human from the year 2042 to protect her, plus a new friend with a long history of battling Terminators.

With the most badass entrance since Ripley wore the loader, Linda Hamilton is back as Sarah Connor, instantly giving Dark Fate enough juice to send all the sequels without her to a time of wind and ghosts.

But director Tim Miller is just getting started. The action-filled set pieces keep coming, each one surpassing the last and bursting with the stylized energy he brought to Deadpool.

We knew he’d be back, but we didn’t expect him as a T-800 model living a quiet family life as “Carl,” and selling high quality draperies at rock-bottom prices. He’s a stone-faced hoot, and when Carl and Sarah get back in their guns blazing, side by side saddles, just try to keep the nostalgic smile off your face.

But even with all this surface level fun, the film’s secret weapon is a script from David S. Goyer, Justin Rhodes and Billy Ray that’s heady enough to wonder if they got an early look at Rambo: Last Blood and thought a 2019 franchise revival that wasn’t offensively tone deaf might be nice. Each character has an arc to anchor it, and while the film is always mindful of how the future can be rewritten, the topical nods to border security and valuing women as more than birthing vessels are unmistakable.

OK, fine, there are a few clunky spots, some lower-grade CGI on the hyper-jumps and an (understandable) overconfidence in how much we want this to work.

But we do, and damn near all of it does, enough to make you hope they won’t be back.

← Every Rose Has Its Thorns
Flip or Flop →
Scroll Up