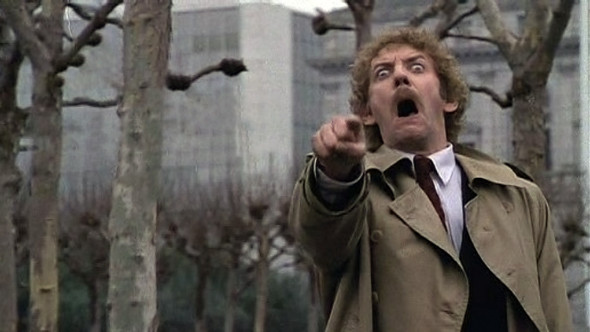 Aliens tend to be very scary. Whether they’re sucking blood from some unsuspecting, love struck plant store employee or leaving crop circles out behind Mel Gibson’s barn, unleashing slugs who share group consciousness or luring us into a fearsome carnival to learn the true meaning of “scary clown,” aliens are tough to trust. Just like Mulder says, and indeed, it was the fresh new look at The X-Files that inspired this week’s count down: the scariest alien movies.

Marcia Gay Harden is characteristically brilliant as the religious zealot who turns survival inside the store into something less likely than survival out with the monsters, but the whole cast offers surprisingly restrained and emotional turns.

The FX look good, too, and the film itself is best seen in via the black and white version. Regardless, it’s the provocative ending that guarantees this one will sear itself into your memory.

Writer/director James Gunn took the best parts of B-movie Night of the Creeps and Cronenberg’s They Came from Within, mashing the pieces into the exquisitely funny, gross and terrifying Slither.

Among the best remakes of all time, Philip Kaufman’s Invasion of the Body Snatchers creates an oppressive, delirious atmosphere that will not let you go. San Francisco health department workers originally believe some friends are becoming paranoid, sensing a non-existent distance in their loved ones, but soon realize that an alien species is replacing human beings with replicas – exact duplicates, except for the lack of emotion.

The sound and visual effects are especially magnificent when compared to other films of the era, but they age well and give the film a gritty realism that feels unsettling against the fantasy storyline.

The cast is weirdly perfect – the unflappable Donald Sutherland, the naturally emotionless Leonard Nimoy, the effortlessly weird Jeff Goldblum, and Nancy Cartwright, who screams so well when aliens show themselves.

John Carpenter’s remake of the 1951 SciFi flick The Thing from Another World is both reverent and barrier-breaking, limiting the original’s Cold War paranoia, and concocting a thoroughly spectacular tale of icy isolation, contamination, and mutation.

Director Ridley Scott handled the film perfectly, emphasizing the tin can quality of the futuristic vessel. These people are simply not safe – they probably were in danger before bringing the afflicted John Hurt back on board. It’s dark in there, decaying and nasty – just like some moldy old mansion. The trick here is that these people- unlike the inhabitants of a haunted house – truly cannot go anywhere. Where would they go? They’re in space.
Much ado has been made, rightfully so, of the John Hurt Chest Explosion (we loved their early work, before they went commercial). But Scott’s lingering camera leaves unsettling impressions in far simpler ways, starting with the shot of all those eggs.