Pieces of a Woman

Pieces of a Woman opens with a crew working on bridge construction. It closes with that new bridge standing strong after many months of work. And it between, the film gracefully navigates how one woman learns to rise above some deeply troubled waters.

Vanessa Kirby is devastatingly good as Martha, a pregnant Bostonian who settles in with her partner Sean (Shia LaBeouf, a bit too showy) for the home birthing experience they have planned since day one.

What they didn’t plan on was backup midwife Eva (a terrific Molly Parker) having to take the lead when their original choice is tied up with another, longer-than-expected delivery. And when events turn tragic, Martha and Sean are hit with waves of grief while family, friends, and lawyers search for blame and restitution.

And what a vessel the filmmakers have in Kirby, who stakes her claim as a talent full of staggering depth. From the robotic, soul-deadening way Martha responds to condolences to her final defiance against her tone deaf mother (a blistering Ellen Burstyn), Kirby delivers every note of Martha’s arc with a humanity that is achingly real.

This is a film that delivers just what the title promises: one woman, shattered into pieces, grasping for the chance to heal in her own way, on her own terms. And even in its most uncomfortable moments, Pieces of a Woman doesn’t blink.

That, and Kirby, make it hard to look away. 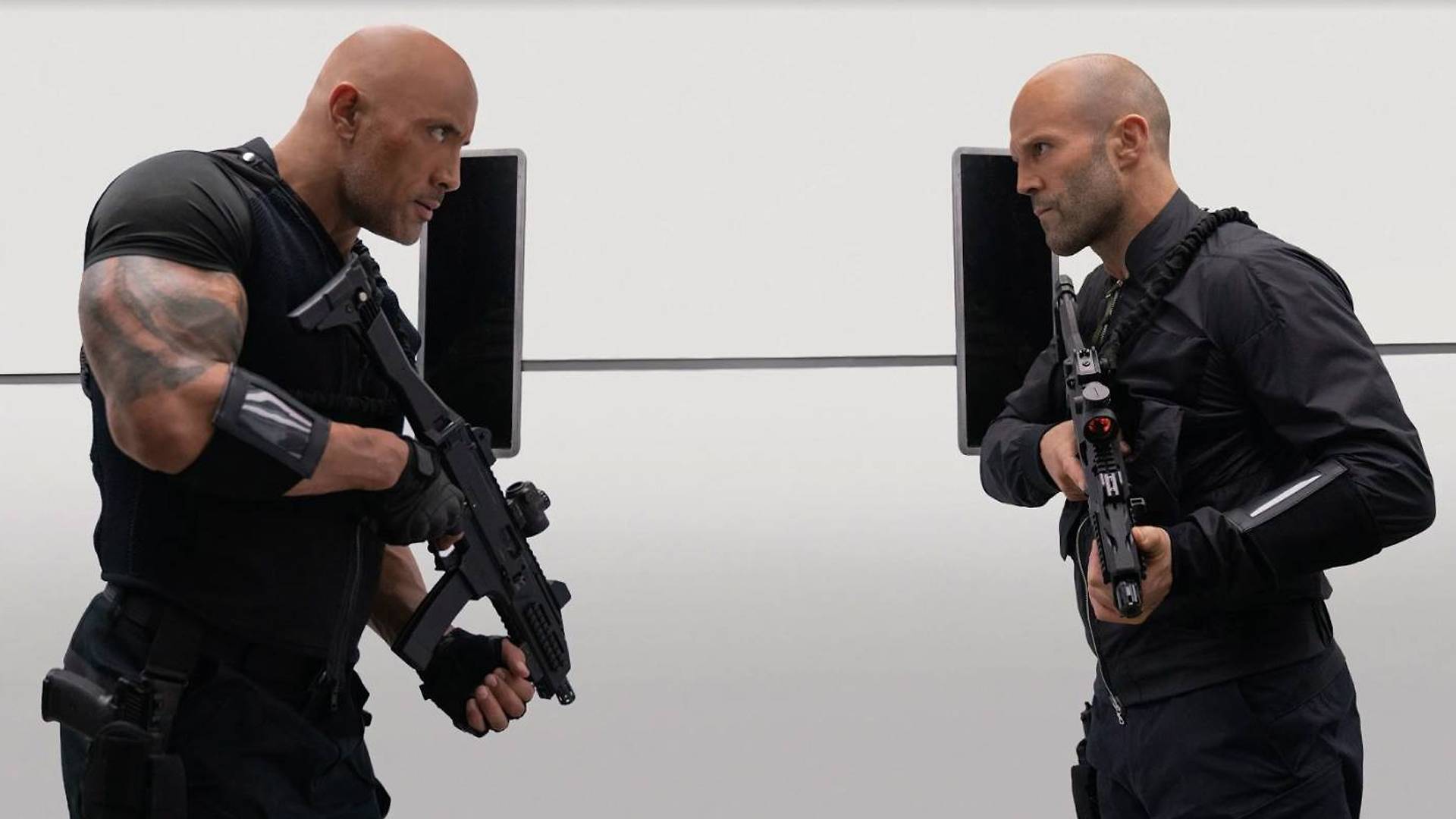 Somewhere around its 6th installment, the Fast & Furious franchise tweaked its direction, abandoning logic and embracing ludicrous action as it jumped cars from skyscraper to skyscraper and waterskied off the back of launched torpedoes.

But things took off for real around Episode 7 when some mad genius decided to pit mountainous government operative Hobbs (Dwayne Johnson) against Limey nogoodnik Deckard Shaw (Jason Statham), each of them playing a self-lampooning version of themselves. Fun!

Where to go from there? How about we drop that whole car heist and espionage thing, expel Vincent Toretto and gang, bring in Idris Elba and see what happens?

And for the very first time, I was kind of looking forward to a F&F film.

The film indulges in the best elements of F&F (action lunacy, self-aware comedy) and dispenses with its weaknesses (schmaltz, Diesel). F&F: H&S consists primarily of fistfights, gun fights and vehicular chicanery stitched together with comic lines. Unfortunately, there is a plot, but it doesn’t get in the way too much.

A virus meant to thin the herd falls (or is injected!) into the hands of a rogue
(or is she?!!) MI6 agent. The CIA (or is it?!!!) pulls together the two old enemies for no particular reason, but Ryan Reynolds shows up in a decidedly peculiar cameo (one of several to look out for) that draws your attention away from the first of many gaping plot holes.

By this point (about 7 minutes into the film) we’ve been through three separate fight sequences, each meant to articulate the character of one of our leads: down-and-dirty badass (Hobbs), smoothly lethal sophisticate (Shaw), smart and efficient and highly contagious (Vanessa Kirby as MI6 virus thief Hattie), and Black Superman (Idris Elba, who gives himself the name, but if it fits…).

Right. Enough with plot, on to stupifyingly illogical and imaginative action. Hobbs & Shaw offers quite a spectacle.

It bogs down when it gets away from the explosions, wheelies and punches. Whether devoting excessive time to pissing contests or to dysfunctional family backstories, director David Leitch—who proved his action mettle with Atomic Blonde—too often forgets that words are not this franchise’s strongest suit.

Still, there is something compelling about watching Black Superman V Samoan Thor. I don’t know that there’s enough here for a franchise springboard, but there’s plenty for a wasted afternoon. 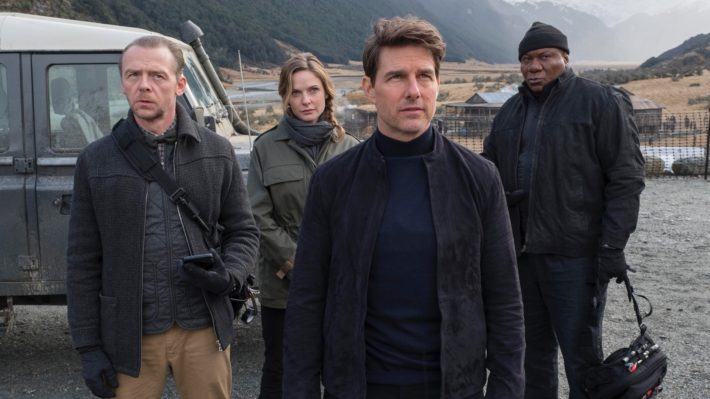 Tom Cruise’s next mission – and he’ll most likely accept it – is to try and outdo the stunts he pulls in this latest Mission: Impossible entry. Good luck with that, because Fallout delivers the GD mail.

It’s an action film that hits on nearly every cylinder, thrilling enough to elevate the value of the other five films in the franchise.

Writer/director Christopher McQuarrie (a frequent Cruise collaborator) returns from 2015’s MI: Rogue Nation, leaning on that solid foundation while he ups every ante, delivering not only his most impressive work as a director, but his most complete screenplay since The Usual Suspects.

Cruise’s Ethan Hunt draws the ire of his IMF boss (Alec Baldwin) and his boss’s boss (Angela Bassett) by choosing the lives of his team (Ving Rhames, Simon Pegg) over a stash of rogue plutonium. To keep that payload from the highest bidder, they have no choice but to accept help from agent August Walker (Henry Cavill and the ‘stache that ate DC), a “kill now-ask questions later” bruiser.

It can’t go unnoticed that Fallout marks the third blockbuster this year to feature a villain whose goals are more societal than financial.

Coincidence? Clearly no, but McQuarrie’s script keeps the social commentary smart, subtle and out of the way.

Sly, self-aware references ground the film when it’s in danger of reveling in any Bond-ish excess, with plenty of well-placed surprises that, even when they’re not that surprising,  help ease the bloat of a 2 and 1/2 hour running time.

But let’s not kid ourselves, that’s all just spy game gravy.

These stunts – from rooftop to mountaintop, crowded streets to midair and beyond – are showstoppers, with Cruise so electric a t-shirt proclaiming “movie star” would not be out of place under Hunt’s endless supply of tight black jackets.

Cruise’s insistence on doing these stunts himself got him a broken ankle, but there is plenty of gain for his pain. You cannot deny the added authenticity his stuntwork brings to these set pieces, with McQuarrie’s nimble camerawork and some luscious landscapes sealing the deal.

Say what you what about the summer movie season so far, Fallout is here to make you remember how breathlessly fun it can be.