You didn’t think Great White-invested tornados meant the pool of shark movie premises was running dry, did you? Not so long as someone is just conscious enough to mumble “Statham fights a shark” in a drunken pitch meeting!

The Meg brings that premise to 3-D life, with Statham wet-suitting up as Jonas, the reluctant hero with a haunted past. After a tragic encounter with a giant underwater beast, Jonas hangs up the scuba mask to drink away his days in the bars of Thailand.

But five years later, his ex-wife is part of an undersea research team at the mercy of the legendary Megaladon, a 70-foot long “living fossil” of a shark thought to be extinct for over 200 million years. Jonas, of course, knew it wasn’t, and now he must tell everyone “I told you so” with his most steely glare, go back on his vow to never dive again, and take everything much too seriously.

And that’s the biggest misstep weighing down the entire film. You get the feeling that with a knowing, “Kong: Skull Island” type of monster vibe, this could have been fun, but director Jon Turteltaub (National Treasure) can’t settle on one charted course.

Turteltaub and his team of writers adapt the first of Steve Allen’s “Meg” novels with a host of changes, presumably meant to bolster Statham’s damaged hero quotient. The dramatics are overdone by nearly all involved (though Rainn Wilson, as the billionaire behind the research, finds a mark), and when a nicely subtle hat-tip to Jaws opens the gates for all out scene stealing, The Meg becomes a water-logged mess.

A Chinese co-production with a clear eye on international markets, the film has moments of promise that are quickly snuffed out by exposition that’s neither needed, wanted or interesting. Where’s the fun, sharky nonsense promised by the trailer? That movie might have been a guilty pleasure.

The Meg is just guilty. 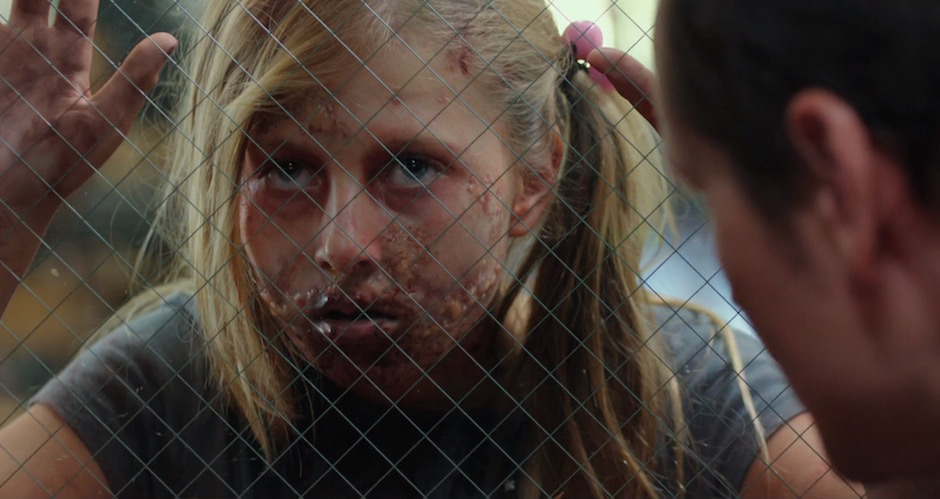 Kids are nasty bags of germs. We all know it. It is universal truths like this that make the film Cooties as effective as it is.

What are some others? Chicken nuggets are repulsive. Playground dynamics sometimes take on the plotline of LORD OF THE FLIES. To an adult eye, children en masse can resemble a seething pack of feral beasts.

Directing team Jonathan Milott and Cary Murnion harness those truths and more – each pointed out in a script penned by a Leigh Whannell-led team of writers – to satirize the tensions to be found in an American elementary school.

Whannell – co-creator of both the Saw and Insidious franchises – co-stars as the socially impaired science teacher on staff. He’s joined by a PE teacher (Rainn Wilson), an art teacher (Jack McBrayer), two classroom teachers (Alison Pill, Nasim Pedrad), and the new sub, Clint (Elijah Wood), in a fight for survival once an aggressive virus hits the student population of Fort Chicken.

Cooties is also not the first horror film to mine tensions from the image of monstrous children turned against us. Come Out and Play (both the 2013 American version and its Spanish predecessor Who Can Kill a Child?) generate tensions based on the presumed difficulty an adult would have in slaughtering children.

Two things set Cooties apart. One: It is often laugh out loud funny. Two: It is willing to indulge the subversive fantasy of (possibly all) school teachers.

They kill a lot of children in this movie.

If Murnion and Milott couldn’t find the comedic tone to offset the seriously messed up violence, the film would be a distasteful, even offensive failure. But, thanks in part to a very game cast, as well as an insightful screenplay, Cooties comes off instead as a cathartic (if bloody) metaphor and an energetic burst of nasty fun. It might be welcome after school viewing in the teacher’s lounge.