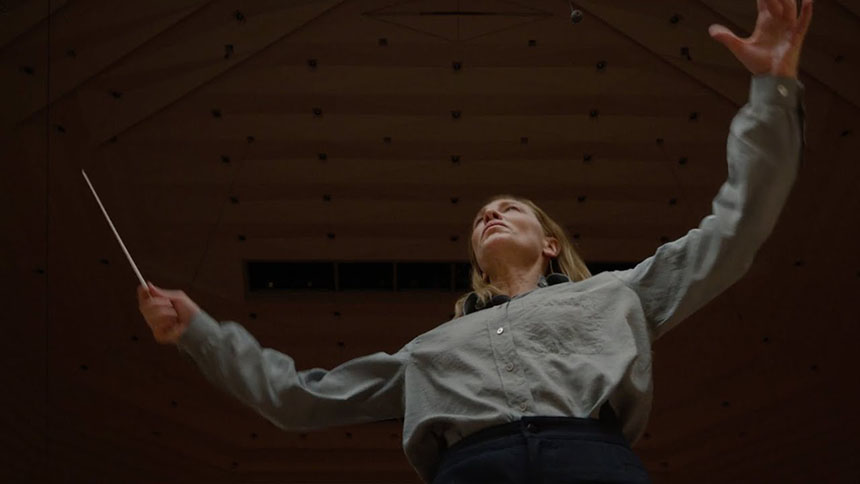 During production of writer/director Todd Field’s terrific 2001 feature debut In the Bedroom, Harvey Weinstein reportedly made life so miserable, Field considered leaving the movie business altogether. He did return in 2006 with the equally impressive Little Children, but Field has been quiet since then.

All these years later, it’s not hard to imagine the Weinstein experience as an inspiration for Tár, a searing character study of art, arrogance, obsession and power that’s propelled by the towering presence of (surprised face) Cate Blanchett.

She is Lydia Tár, the first female music director of the Berlin orchestra. A nicely organic interview introduction runs down Lydia’s impressive resume, immediately cementing the character as one of the greatest living composer-conductors in the world.

And, as is her way, Blanchett (who prepped by learning several instruments and studying conducting) needs mere moments to define Lydia with sharp, unforgettable edges.

Tár is a control master who will converse and condescend with excess pleasantries, all the while keeping antenna up for anyone in her orbit who might contradict her careful plotting. And Field’s use of precise sound design and only diagetic music is a brilliant way to reinforce the maestro’s level of influence on everything around her.

Lydia is in rehearsals for a triumphant performance of Mahler’s 5th symphony, and also has a new book prepping for release. So while there’s much going on professionally, it’s the detailed, yet unassuming way Field narrows his focus to Lydia’s personal cruelty that brings the film to such a resonant point.

She humiliates a young student for daring to question a status quo power structure, takes advantage of her dutiful assistant’s (Noémie Merlant from the exquisite Portrait of a Lady on Fire) ambitions, works to remove an Assistant Conductor (Julian Glover) who dares to criticize, and is routinely dismissive of her wife (Nina Hoss).

The way Lydia handles a child bullying her young daughter is our first glimpse at true sociopathic tendencies, but Field – with moments of both sly humor and biting sarcasm – gradually unveils a familiar culture of predatory behavior.

To say the portrayal is perfection feels almost dismissive or perfunctory considering Blanchett’s mastery of her own art, but maybe that’s why this role stands apart. Maybe it’s her own experience, so unlike nearly anyone else’s, that shapes the organic and human performance. You want to feel for Lydia, or at least recognize how a genius with power begins to believe they are entitled to something. Or someone.

It’s in moments when Lydia dismisses ideas of gender inequality or coyly celebrates the history of patriarchy in her own profession that Field and Blanchett best expose the insidious nature of power. The storytelling is striking in its intimacy, gripping in its universal scope.

Tár is a showcase for two maestros working at the top of their game.