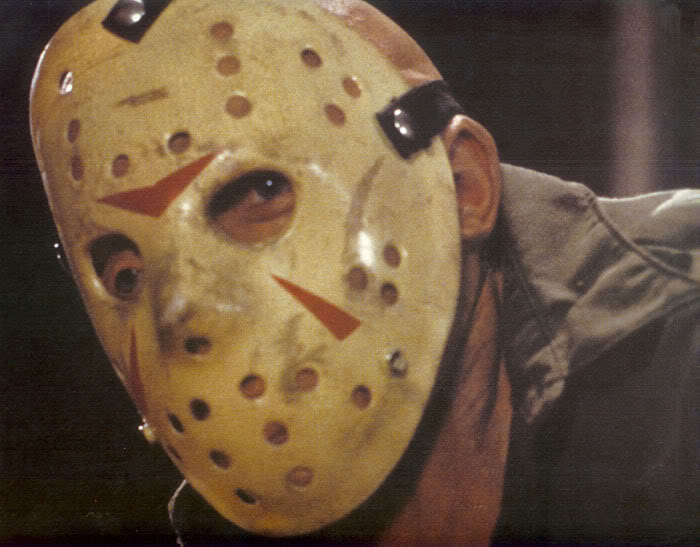 It is creepy when you can’t see someone’s face, unless it’s hidden behind one of those big horse masks, which forever tickle George. But whether the voice on the other side of that mask is asking if Tamra’s home or is telling you where to find your missing daughter, whether that mask is made of burlap, human flesh or the NHL standard fiberglass/Kevlar mix, murder is highly likely.

Here are our favorite masks in horror.

There are so many reasons to love this movie, but the fact that it started that incredibly effective trend in horror movies: the anonymity of the group mask.

It was done again and to magnificent effect in The Purge films, Strangers, and You’re Next. But what Robin Hardy does with it gooses the macabre, medieval nuttiness of his story. A bunny has rarely looked so menacing.

What made Tobe Hooper’s 1974 classic the unnerving, even scarring, savage film that it was? The meat hook? The slam of that heavy metal door? The sound of the chainsaw?

There are so very many moments of terror, so many reasons to scream, you can almost overlook the fact that the main character, though he delivers no lines at all, is wearing somebody else’s face. In fact, depending on the scene (or his mood? his outfit?) he could be wearing any one of three different faces.

How messed up and genius is that?

Director Georges Franju casts a spell with the haunting Christiane (Edith Scob). Graceful and lifeless, the mask hides Christiane’s flaws and her humanity. She is otherworldly.

Unlike the grotesque image often drawn by a mask in a horror film, Christiane’s smooth, colorless visage is as lovely and melancholy as it is terrifying.

Thematically, it makes sense. Young Michael Myers is wearing a mask, looking through those little false eye holes, when he commits his first, soul-deadening murder. So when he comes home to pick up where he left off, naturally he’d need another costume.

But what John Carpenter created with his altered William Shatner mask was the prototypical boogeyman for all slashers to follow and for all retro horror after that. The soulless, colorless, unmoving face perfectly matched the lifeless killing machine, transforming Michael Myers into The Shape and changing the shape of horror as it did.

First of all, the sack head Jason from Part 2 is so much creepier than the hockey mask Jason of Parts 3 – X and beyond. That burlap sack has been a terrifying look in horror movies (from The Town that Dreaded Sundown to Nightbreed to The Orphanage to Trick or Treat).

But it’s the hockey mask you remember. That’s the image that became iconic. Hell, it even made goalies seem cool. (Yes, they stole the idea from the old Martin Landau/Jack Palance/Donald Pleasance film Alone in the Dark, released earlier the same year), but still, who wore it better?

The original Phantom’s mask may not be the coolest. In fact, his mask has evolved over the decades and iterations into something way, way cooler looking. But back in 1925, it was the mask and its removal that made this film a heart attack in the making.

Director Rupert Julian and star Lon Chaney used that mask and its removal to deliver one of cinemas first great scares.