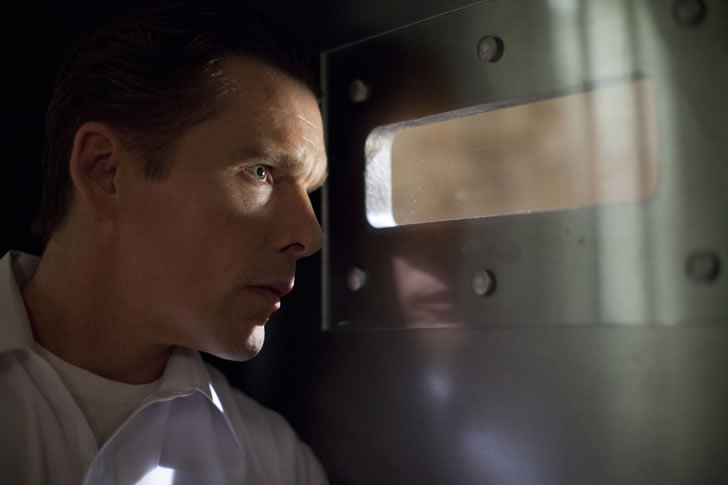 In less than ten years, America will be a land full of jobs and free of crime, with citizens reciting a pledge to the “new founding fathers.” The catch? Once a year, all laws are lifted for a twelve hour free-for-all, as Americans are encouraged to cleanse their souls of rage.

That’s the premise of The Purge, and it’s a pretty solid one, with deep roots easily traced to  The Hunger Games, A Clockwork Orange, and classic short stories such as The Most Dangerous Game and The Lottery.

There are countless other film examples, and no surprise,  a visionary director is usually the difference the good (Straw Dogs) and the bad (Hostel).

The Purge falls somewhere in the middle. Writer/director James DeMonaco sets a firm hook, as security system salesman James Sandin (Ethan Hawke) comes home to his family in an upper crust neighborhood. He bids his friends and neighbors a “safe night,” puts flowers on the lawn to show his public support for the purge, and battens down the family hatches, hoping to survive the night.

DeMonaco isn’t subtle with the message of the haves feeding off the have-nots. Give him credit, though, for weaving liberal guilt, right-wing rage, racial tensions, paranoia, national security and more into the mix, creating a tense, subversive clash of moral ambiguities.

Of course, it does turn out to be a bumpy night for the Sandins, and when the film shifts into home-invasion standoff mode, trouble comes a-knockin’.

The intruders are modeled heavily on the killers from both The Strangers and Funny Games, there are cliches and lapses in plausibility, but still, DeMonaco finds ways keep you interested. Nifty camera work, a quick pace and some good playoffs do much to overcome the flaws. You get the feeling DeMonaco wrote the script and the storyboard together, letting his director side step in when doubts arose, reassuring his writer side that they could make it work.

In a way, they were both right. The screenwriter has much on his mind, but after a solid start, boxes himself in and chooses the easy way out. The director takes it from there, finding some stylishly resourceful ways to make The Purge worth a look.

One thought on “A Bumpy Night”