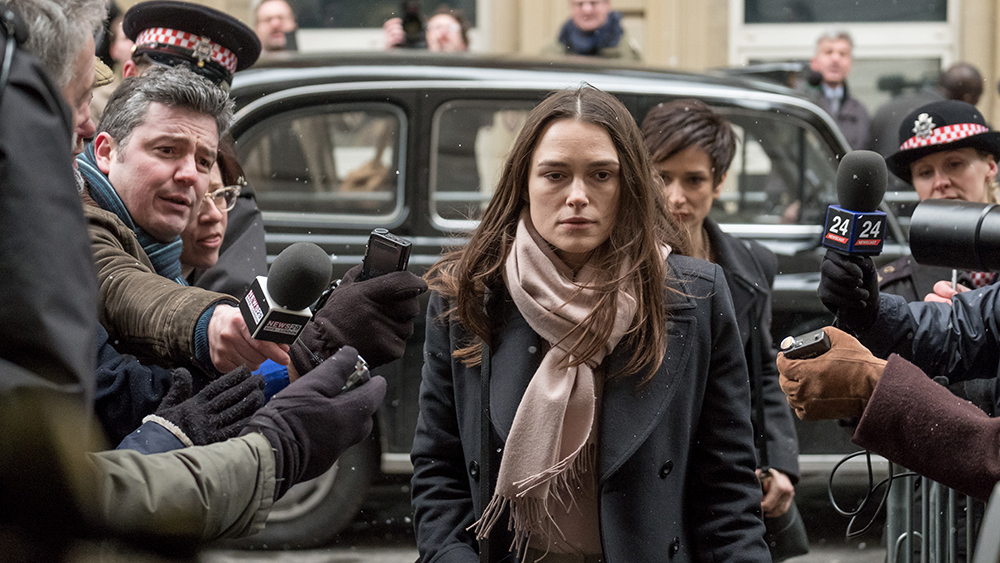 While there are a number of fine points to James Kent’s The Aftermath, novelty is not among them.

You don’t need to know the plot, you just need to glimpse the movie poster: Jason Clarke is married to Keira Knightly; Alexander Skarsgård lives in their attic.

What happens, do you think? Any guesses?

It’s a love triangle you’d have to have your eyes closed to miss. No, the plot is not going to surprise or, to be honest, particularly entertain. Give Kent and Aftermath credit, then, for mining its backdrop for genuine tension, not to mention fascinating historical detail.

Knightly is Rachael Morgan, wife of a British colonel (Clarke, obv). She joins him in his post-victory assignment in what’s left of Hamburg, 1946. He’s been given the home of a German architect, Herr Lubert (Skarsgård), and in Morgan’s compassion (and naivete), he invites the former owner and his teenage daughter to stay on rather than face the harsh realities of the camps.

Clarke—who too often plays cuckolded husbands to waifish beauties and handsome houseguests—offers a sympathetic turn as a grieving man coming to grips with both a crisis of conscience as well as profound grief. Through him we glimpse the chaos of a divided city, conflict and hatred still echoing through rubble-strewn streets.

He’s intriguing, as are those minor characters who orbit his military life: the rogue Aryans still loyal to the cause, comrades taking pleasure in continuing to punish Germans, and the teenage girl lurking in the shadows of his own home.

Though the film continues to direct your attention to the beautiful people struggling against their desires, it’s angry adolescent Freda Lubert (Flora Thiemann) whose silent contempt compels attention. She’s wonderful, creating a spoiled, misguided character who’s hard to like and harder to predict.

It’s a nice distraction from a film that is otherwise as unsurprising as any you’re likely to see. Knightly and Skarsgård perform admirably in blandly familiar roles. And, of course, they look glorious. But pretty as they are, every moment they’re onscreen you’ll wish to be back out in the ruins of Hamburg with the actual characters. 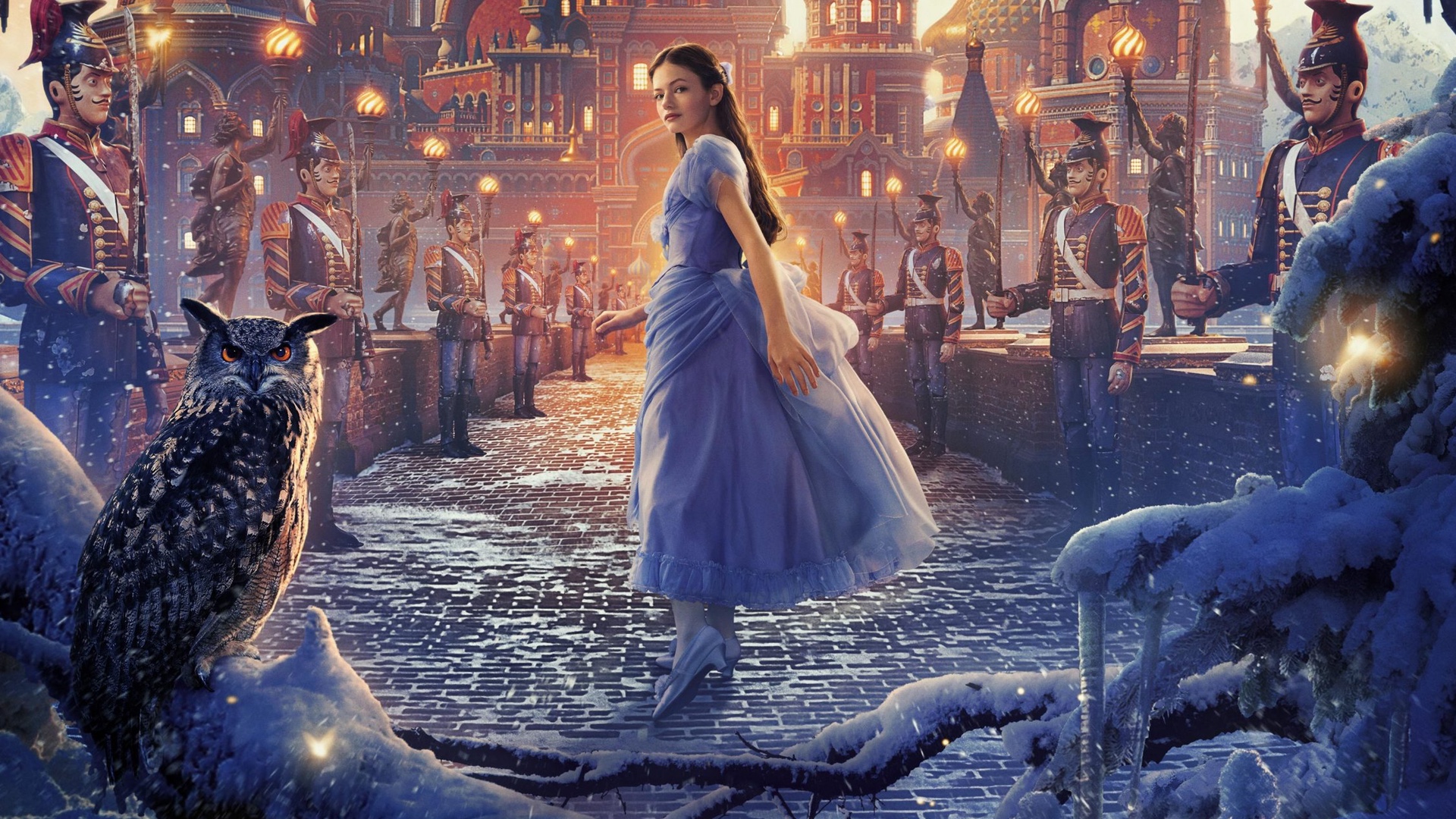 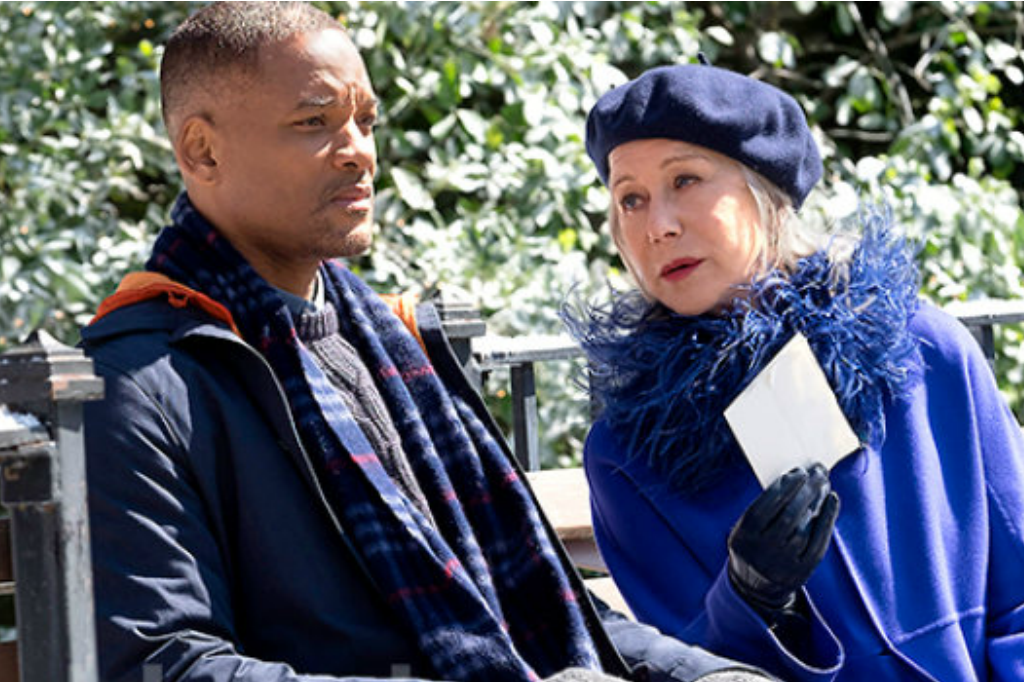 It’s December. That means many things to many people – to Will Smith, it means Oscar bait season.

One of those movies is pretty good. It isn’t this one.

In Collateral Beauty, Smith plays Howard, a charismatic ad exec whose daughter died three years ago. Since then, he’s been a zombie, rarely eating, riding his bicycle dangerously and spending his work days building elaborate domino structures just to watch them collapse.

In a fit of grief one night, he writes three letters: one to death, one to time, and one to love.

In an audacious contrivance, wheels turn in the minds of his friends and colleagues – played by Kate Winslet, Ed Norton and Michael Pena – and the next thing you know, those letters are returned to sender, by hand, by the recipient.

Death – played with panache by Helen Mirren, has lessons to share, as do Love (Keira Knightly) and Time (Jacob Latimore).

Loeb tackled the same theme with his first feature, Things We Lost in the Fire – a well-cast effort that seeks to provide resolution to the grieving. From there, he’s mostly written bad comedies, often starring Kevin James.

Smith stares, tears up and rarely speaks in this cloying, predictable piece of pseudo-enlightened garbage – a film that offers telegraphed twists and jaw-dropping self-satisfaction.

One person’s grief is really nobody else’s damn business. It’s not a learning opportunity for those around, and there are no easy resolutions. Collateral Beauty does not empathize with the grieving. It empathizes with those uncomfortable with grief.

This is selfish. And yet, selfishness is applauded in this film, reframed as confused acts of love.