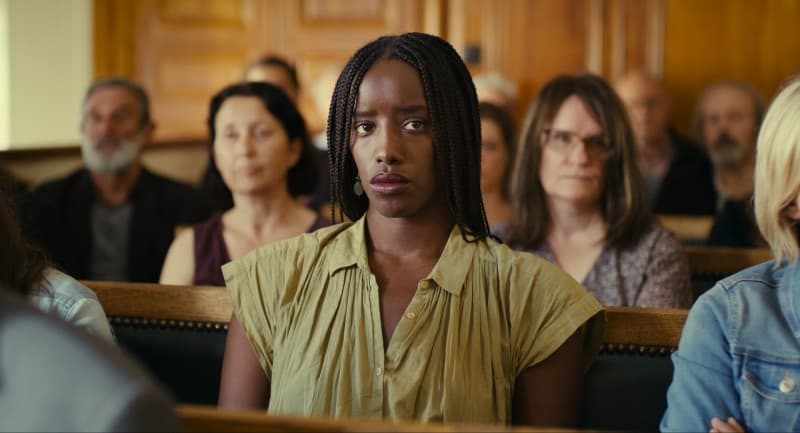 “I am not the responsible party.”

Laurence Coly (Guslagie Malanda) admits that she deliberately left her 15-month old daughter on the water’s edge to die, alone at the mercy of the tide. But Mlle. Coly tells a court in Saint Omer, France that she is not to blame.

Rama (Kayije Kagame), a literature professor and novelist, has made the trip from Paris to attend Coly’s trial. Rama’s plan is to adapt the case into an updated version of the ancient myth of Medea (calculated revenge against an unfaithful husband). But Rama is now four months pregnant, and like Coly, she is a woman of Senegalese descent in a mixed-race relationship. And the more Coly defends herself, the more Rama feels a deepening kinship.

After a string of documentaries, writer/director Alice Diop moves into narrative features for the first time with her eye for authenticity intact. Coly’s case is based on an actual trial that Diop felt moved to attend in person, and she wrote Rama’s character to reflect her own experience.

Diop’s approach is strictly observational, and mostly anchored in the courtroom where Coly’s story is told, rebutted and debated. And though films with more tell and less show often suffer with emotional connection, Diop mines two impressive lead performances for resonance that comes from the things that are not being said.

Perspectives shift frequently, and an emotionally complex conversation emerges that begs for humanity in the midst of an unthinkable act. But no matter who may be speaking, or what side they may be on, we feel the bond growing between Rama and Coly, which makes Diop’s one overt camera move in the finale all the more worthy.

There is a judge in this French courtroom, but Saint Omer invites us to sit on the jury. It is a thoughtful and sensitive discussion that may surprise you. And it is one worth having.