For a while, anyway, but if that’s all you’re expecting from Climax, you don’t know your Noe.

After a mysterious opening mix of bloody snow angels and claims of “true events,” Noe showcases audition interviews for a French dance troupe before jumping ahead to the group’s transfixing final rehearsal.

Selva (Sofia Boutella) and the crew are ready for the show, so now it’s time to let off some steam as only they can. DJ Daddy (Kiddy Smile), drop some beats!

“What is wrong with you all?”

He is also again wearing his heart on his screen, with a stacked movie collection directly calling out influences from Possession to Suspiria. But Climax is unforgettably a Noe vision, one of his most concise, streamlined and clearly inspired.

It is 97 minutes of can’t-look-away intensity, a bold experience that may leave you asking “what just happened?” while you look for a nice place to lie down.

But oh, those dreams you’ll be having. 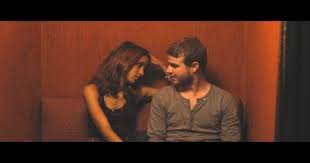 If you’re in the market for a creepy guy, I suggest Brady Corbet.

Corbet, while probably a perfectly nice young man, is proving to be skilled at acting creepy, most notably in Melancholia, Martha Marcy May Marlene, and the American version of Funny Games.

He gets his meatiest role to date in Simon Killer, a film he also co-wrote. Corbet shines as the title character, a recent college graduate who takes off for Paris after a mysteriously nasty break-up.

Struggling to fit in, he strikes an uneasy relationship with a local prostitute, and soon hatches a plan to make them both big money by blackmailing her clients.

Director Antonio Campos sets the film up as a possible thriller, then slowly draws you into what becomes a character study of a manipulative sociopath. While some may  wonder what the point is, there is a hypnotic nature to the film that keeps you interested in Simon, and what he is capable of.

Pretentious in spots but ultimately fascinating, Simon Killer is a creepy keeper.