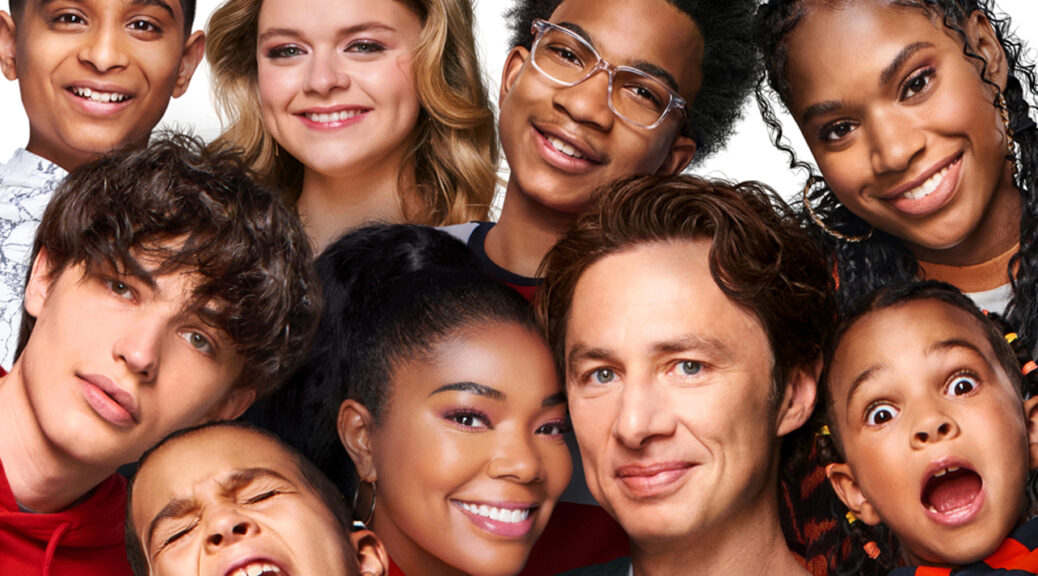 Cheaper by the Dozen

By now, you’re probably pretty familiar with the premise of Cheaper by the Dozen. But really, the best way for adults to enjoy this new Disney version is by using it as a way to gently introduce small children to more grown up issues.

This time, the heads of the blended brood are Zoey and Paul Baker (Gabrielle Union and Zach Braff), who first meet cute at the L.A. breakfast joint he owns. Their marriage and eventual offspring create a blended family full of diverse and seriously precocious siblings, step-siblings, and later a wayward cousin in need of some guidance. Throw in two ex-spouses (Erika Christensen and Timon Kyle Durrett) who are never far from the shenanigans, and that’s the way they become the Baker bunch.

Director Gail Lerner and the writing team of Kenya Barris, Jenifer Rice-Genzuk and Craig Titley all have extensive credits in series television, which would be a good reason why everything about this film screams “TV sitcom.”

Plot points are hastily introduced and heavily contrived, while any conflicts are soft-peddled and quickly worked through with barely a bad mood or sass mouth in sight. One thing you will see is some surprisingly modest set design (especially for those high school basketball games, yikes) that too often seems fit for an afterschool special.

The Bakers get a corporate offer to franchise the diner and market Paul’s special cooking sauce, so the gang moves on up to a sprawling house in Calabasas that requires just one afternoon to completely move into.

But settling into a new home brings some challenges for everyone. There’s bullying, peer pressure, and dating drama for the kids, while the parents face bless-your-heart prejudices and questions about mixed-race parenting.

Union and Braff are both likable actors, and that’s all they are asked to be, because no one in the film comes anywhere close to resembling a real person. And much like these characters, all the worthy issues raised are treated with a “we got 23 minutes minus commercials” mindset and wedged in between telegraphed attempts at humor and constant mugging.

The PG rating is a bit surprising, because despite the warning of “thematic elements, suggestive material, and language,” everything here is as sanitized as a freshly minted urinal cake.

Cheaper by the Dozen, yes. And you get what you pay for.