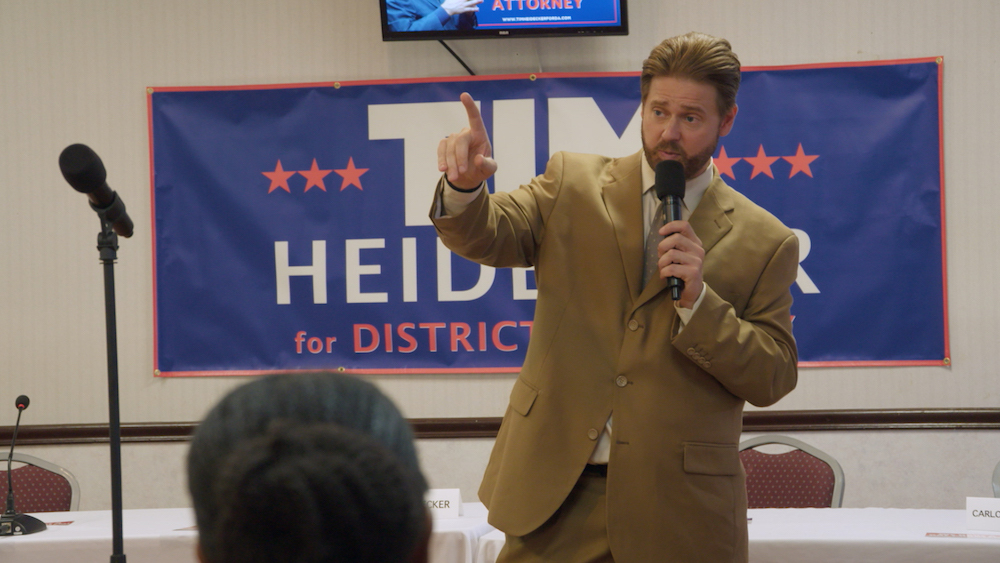 If you didn’t think Tim Heidecker’s Mister America had much in common with Downton Abbey, you’d be right…mostly. But like the big screen edition of that British saga, Mister America expands on a story in progress, superserving those that are already on board.

Fans of Heidecker’s antics may not be as numerous the Abbey faithful, but they may feel even more validated with this film, as he revisits a viral bit from 2017 that had him on trial for the murder of 20 people at a music festival.

Now, star and co-writer Heidecker re-connects with director Eric Notarnicola from their On Cinema and Decker TV projects for a mockumentary treatment of Heidecker’s attempt to unseat the San Bernardino DA who tried to lock him up.

If you know Heidecker for more than his higher profile roles (Us, Ant-Man & the Wasp), you know what’s coming, and you’ll be delighted. He can play it so straight, you start to wonder if some of this nuttiness is actually real.

Then, he goes into a barbershop to embrace racial profiling and propose a ban on rap music.

Sure, he’s riffing on the nature of today’s political climate, but the film often seems caught in between Borat-style bravado and Christopher Guest understatement.

Plenty of the bits land, but plenty others don’t, and those not already in on the joke may be left grasping for a narrative anchor and, much like newcomers to the Crawley saga, just plain bored.