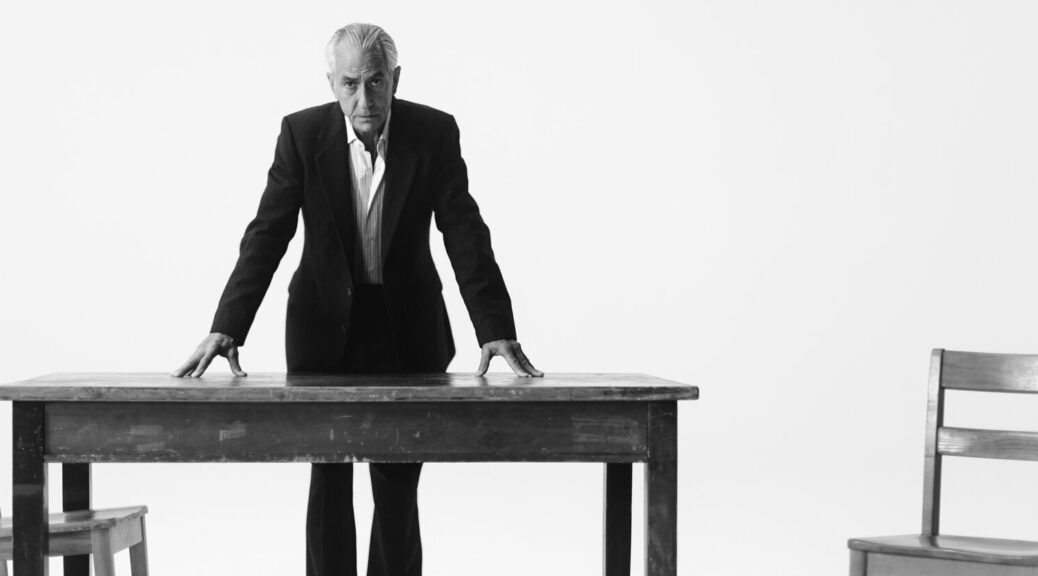 “What can we do that we are not already doing? Do we have a duty, a responsibility as individuals, to do something? Anything? And how do we know what to do?”

These words from Jan Karski, reluctant World War II hero and Holocaust witness, transcend the specific horrors Karski struggled with. They mean as much today as they did decades ago, and that’s just one reason Derek Goldman and Jeff Hutchens’s film Remember This strikes such a chord.

The other reason is David Strathairn. In a stirring performance, Strathairn brings Karski to life and he does it essentially on his own. Remember This is a one-man-show, a filmed stage play written by Goldman and colleague Clark Young, but co-directed by longtime cinematographer Hutchens (who also serves as DP). The combination brings a cinematic quality to the intimacy of the stage. But again, all of this is just support work, helping Strathairn compel your undivided, often teary attention for the full runtime.

The writing here is crisp and urgent and Strathairn delivers it beautifully. There’s nothing showy in his performance, and the unassuming delivery often lands harder than it would have with more drama.

Remembering attending mass and doing as his mother told him as a boy, “I was a good boy.” Recalling his pride to serve Poland and his befuddlement at the blitzkrieg: “Poland lost the war in 20 minutes.”

The poignant understatement serves an important purpose, because there’s no hint of exaggeration or drama or self-indulgence as the actor shares Karski’s recollections of the war, of the death camp, of his inability to persuade the leaders of the Allied forces that their immediate intervention was the only thing standing between Polish Jews and complete annihilation.

“Governments have no soul.”

Hutchens’s camera is subtle but its fluidity in orchestration with lighting, Roc Lee’s sound design, and Strathairn’s movement keep the film from ever feeling stagnant or stage bound. The final result is surprisingly unsentimental, Lee’s subtle score never overwhelming the delicate performance.

Strathairn talks, a broken figure filmed in stark, lovely black and white, and we learn what apathy and inaction can cause. It’s a heartbreaking lesson worth remembering.

“My faith tells me that the second original sin has been committed by humanity through commission or omission or self-imposed ignorance or insensitivity, self-interest, hypocrisy, heartless rationalization, or outright denial. This sin will haunt humanity to the end of time. It haunts me now. And I want it to be so.” 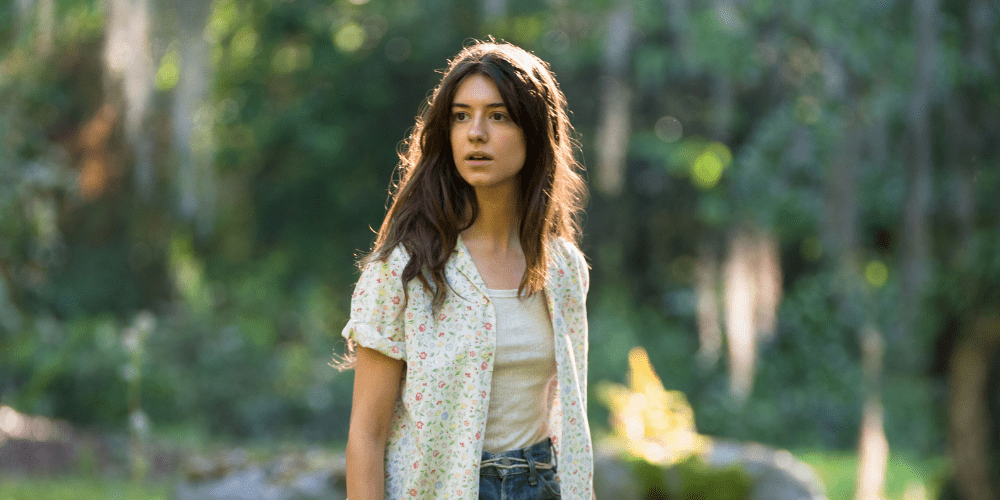 Where the Crawdads Sing

“I had to do life alone. People don’t stay.”

Well-placed within a novel, those words could have major impact. But when you tell it to a movie audience, the power of your visual medium is wasted. You’re not showing us anything, you’re reading to us.

And like so many of these stories of a special girl who hides in plain sight, the big screen version of the Delia Owens bestseller Where the Crawdads Sing employs voiceover narration too early and too often. That’s disappointing, because the film does have its moments.

Most of those moments come from Daisy Edgar-Jones, who stars as Kya Clark, the “Marsh Girl” of Barkley Cove, NC who’s on trial in the late 1960s for the murder of local rich boy Chase Andrews (Harris Dickinson).

Kya won’t agree to a plea deal, and throughout her defense from kindly lawyer Tom Milton (the always reliable David Strathairn), director Olivia Newman weaves in flashbacks of a reclusive young girl who grows up alone in the marshes, somehow emerging closer to Miss Carolina than Nell.

Overthinking it? Maybe, but seeing Beast of the Southern Wild screenwriter Lucy Alibar’s writing credit brings more attention to how often this self-reliance tale leans into fantasy. She and Newman sanitize the southern swamp song for convenience, replacing realistic grit with a makeover-in-waiting.

But if you haven’t read the book, there is a surprise or two in store, and a nuanced turn from Edgar-Jones (Fresh, TV’s Normal People and War of the Worlds) that stands out in a parade of broadly-brushed role players.

The lessons about classism and misogyny may be admirable, but they’re as obvious and as soft-peddled as the quick glimpses of racism and the idyllic marsh environment that’s somehow free of thunderstorms or bug bites.

Where the Crawdads Sing does Southern Gothic like Justin Beiber doing Delta blues. You’ll recognize the words and music, but any true feeling is bogged down by all the polish.

Step right up, folks, and witness a master of the macabre! See Guillermo Del Toro twist the familiar tale of ambition run amuck! Gasp at the lurid, gorgeous, vulgar world of Nightmare Alley!

Bradley Cooper stars as Stan, good lookin’ kid on the skids taken in by Clem (Willem Dafoe, creepy as ever) to carny for a traveling show. Stan picks up some tricks from mentalist Zeena (Toni Collette) and her partner Pete (David Strathairn), then lures pretty Molly (Rooney Mara) to the big city to set up their own mind-reading racket.

Things are going swell, too, until Stan gets mixed up with psychiatrist Lillith (Cate Blanchett) whose patient list includes some high rollers with large bank accounts ripe for the picking.

What Del Toro brings to the tale, besides a breathtaking cast and an elegantly gruesome aesthetic, is his gift for humanizing the unseemly. Edmund Goulding’s 1947 adaptation of William Lindsay Gresham’s novel (a solid slice of noir with Tyrone Power in the lead) dulled the edges of any seediness. Even Tod Browning’s Freaks – maligned as it was – found the unsettling carny life mainly wholesome.

Cinematographer Dan Lausten and composer Nathan Johnson create a delicious playground for Del Toro’s carnival to call home, one where even the most likable members of the family turn a blind eye to something genuinely sickening and cruel happening in their midst. The filmmaker plumbs that underlying horror, complicating Stan’s arc and allowing the film’s climax to leave a more lasting mark.

As usual, Del Toro wears his feelings proudly on his sleeve, with unmistakable but organic foreshadowing that ups the ante on the stakes involved. Anchored by another sterling performance from Cooper, Stan’s journey rises to biblical proportions. An actor whose gifts are often deceptively subtle, Cooper makes sure Stan’s pride always arrives with a layer of charming sympathy, even as it blinds him to the pitfalls ahead.

And Blanchett – shocker – is gloriously vampy. She swims elegantly through the sea of noir-ish light and framing that Del Toro bathes her in, as Lillith casts a spell that renders Stan’s helplessness a fait accompli.

Nearly every aspect of the screenplay (co-written by Del Toro and Kim Morgan) creates a richer level of storytelling than the ’47 original. The dialog is more sharply insightful, the finale more dangerously tense and the characters – especially Mara’s stronger-willed Molly – more fully developed. All contribute greatly toward the film rebounding from a slightly sluggish first act to render the two and a half hour running time unconcerning.

For Del Toro fans, the most surprising aspect of Nightmare Alley might be the lack of hopeful wonder that has driven most of his films. As the title suggests, this is a trip to the dark corners of the soul, where hope is in damn short supply.

So as much as this looks like a Del Toro film, it feels like a flex just from taking his vision to the sordid part of town. But what a vision it turns out to be – one of the year’s best and one of his best.

Don’t believe me? See it with your own eyes, step right up!