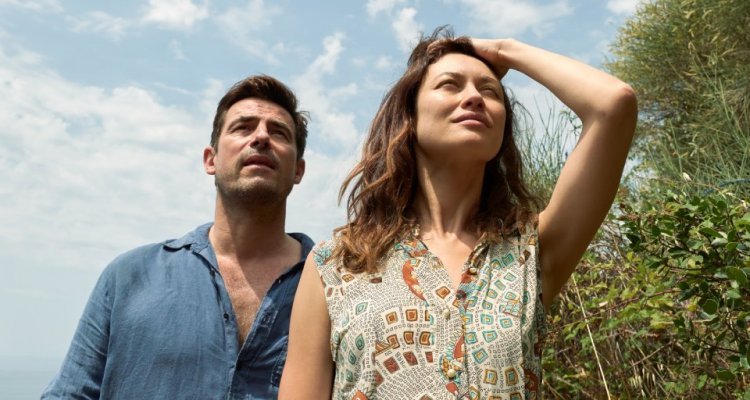 The Bay of Silence

You know those films that make you think, “Man, I bet this was a great book”?

The Bay of Silence is one of those. It has the intrigue, the mystery and the performances to hold your attention, but it feels as if something’s missing. Something like several pages, or even a chapter or two from Lisa St. Aubin de Terán’s 1986 novel.

Design firm exec Will (Claes Bang) and photographer Rosalind (Olga Kurylenko) are enjoying an idyllic getaway in Italy, where Will pops the question with a pull tab (don’t worry, he’s good for a real ring). An opening prologue gives us a glimpse of some trauma in Rosalind’s youth, but it seems like Will, Rosalind and her 8 year-old twin daughters can look forward to happiness as a blended family.

Months later, a very pregnant Rosalind falls from a balcony. Though baby Amedeo is delivered healthy, Rosalind has changed. She’s convinced that she actually delivered another set of twins, and that everyone involved (including Will) is in on the deception.

Ros returns to her photography and her erratic behavior continues, until Will returns home to find his wife, the children, and their nanny (Shalisha James-Davis) all gone.

Will turns to Rosalind’s mother (Alice Krige) and manager/former stepfather Milton (Bryan Cox) for answers, but the mystery of Rosalind’s past, present and future only deepens.

Are we dialing M for madness of murderousness? Director Paula van Der Oest (Oscar nominee for 2001’s Zus & Zo) nails a Hitchcock vibe in spots, but the adapted screenplay from Caroline Goodall – or an editing hachet job order from the studio – leaves too many dangling threads for a completely satisfying payoff.

Rosalind’s fascination with twins is just one of the questions nurtured and then forgotten, apparently in service of a quicker trip to the resolution which is telegraphed pretty early on.

The cast is uniformly splendid (especially Cox, natch) and the locales ooze sophistication. But while The Bay of Silence qualifies as perfectly acceptable adult fare, you can’t help wishing it would have said a little more.