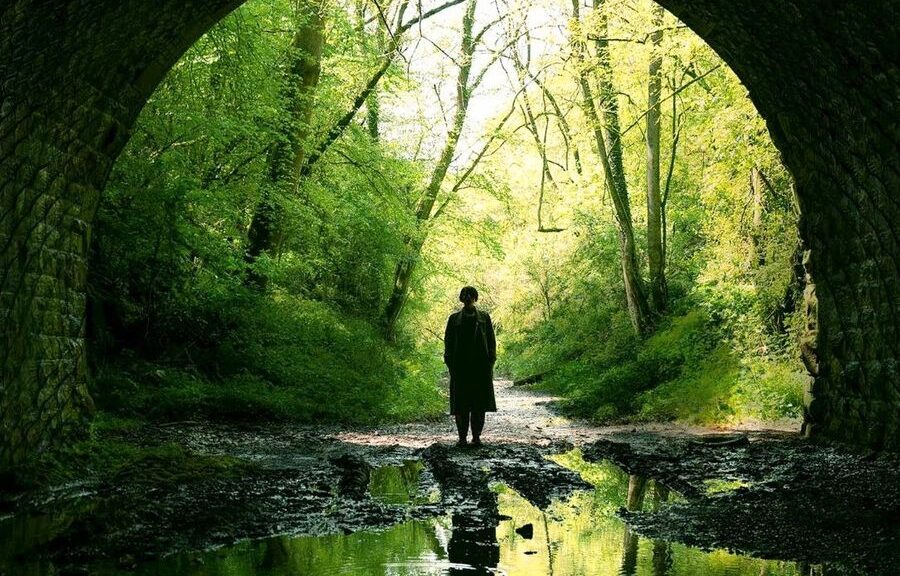 Lena, a biology professor with years of Army training, volunteers to join the new, all-female exhibition into “Area X,” hoping to find any shred of information that could save her husband’s life.

Adapting the first novel in Jeff VanderMeer’s “Southern Reach Trilogy,” Garland has found a perfect scratch for his psychological itch.

Garland builds the film in wonderful symmetry with the hybrid life forms influenced by The Shimmer. Taking root as a strange mystery, it offers satisfying surprises amid an ambitious narrative flow full of intermittent tension, scares, and blood – and a constant sense of wonder.

Utilizing wonderfully strategic splashes of color, and a shifting timeline that drops purposeful breadcrumbs, Garland gives us a mystifying new world from the comforts of our own. Annihilation is the work of a top-tier genre filmmaker, and a challenging journey offering many rewards for those with no appetite for spoon feedings.

What an irresistible treat Ex Machina is – smart, seductive and wickedly funny, boasting glorious visuals, stirring performances and big ideas guaranteed to linger like a dream you just can’t shake.

It is the directorial debut from veteran writer Alex Garland, and instantly marks him as one of the most promising dual threats in film.

Computer whiz Caleb (Domhnall Gleason) gets congrats all around after word gets out that he’s “won” a contest at work. The firm’s founder, Nathan (Oscar Isaac), has picked Caleb as the lucky one who will get a look inside the reclusive genius’s world and assist on a top secret project.

The wide-eyed Caleb is still adjusting to the wonders of Nathan’s ultra secure compound when he learns just why he’s there. Nathan has reached a critical point in his quest to create artificial intelligence, and he needs Caleb to decide if the enchanting machine named Ava (Alicia Vikander) can truly pass for a human.

The ever-versatile Isaac is mesmerizing as Nathan, crafting him as a walking, talking, drinking God complex in bare feet. You know from their first meeting that Nathan has more in store for Caleb than he is letting on, but Isaac never lets that knowledge detract from your curiosity about his character. The slow reveal of his tour de force performance dares you to look away.

Gleason gives Caleb a perfect mix of naïveté and good intentions, while Vikander (A Royal Affair) is a true wonder as Ava. Living in the space between woman and machine, Vikander pulls it off with nary a hint of caricature.

Garland, as he did with 28 Days Later and Sunshine, creates an intelligent, thought-provoking science fiction tale, steeped in classic themes but freshly painted from a modern perspective. You’ll be reminded of the classics Frankenstein, Eyes Without a Face and Blade Runner, as well as recent entries such as The Skin I Live In and Under the Skin, while never doubting that Garland’s is an original voice.

In many ways, he’s expanding on his script adaptation for the underrated Never Let Me Go, continuing to explore just what it is that makes us human, but not ignoring the large, complicated part that sexuality plays in that equation.

Sci Fi and horror films have long provided glimpses into a particular generation through the fears and anxieties that manifest on screen. Anchored in science, sex and creation (sound familiar?), Ex Machina is an insightful, deliciously fun time capsule we need to open right now.