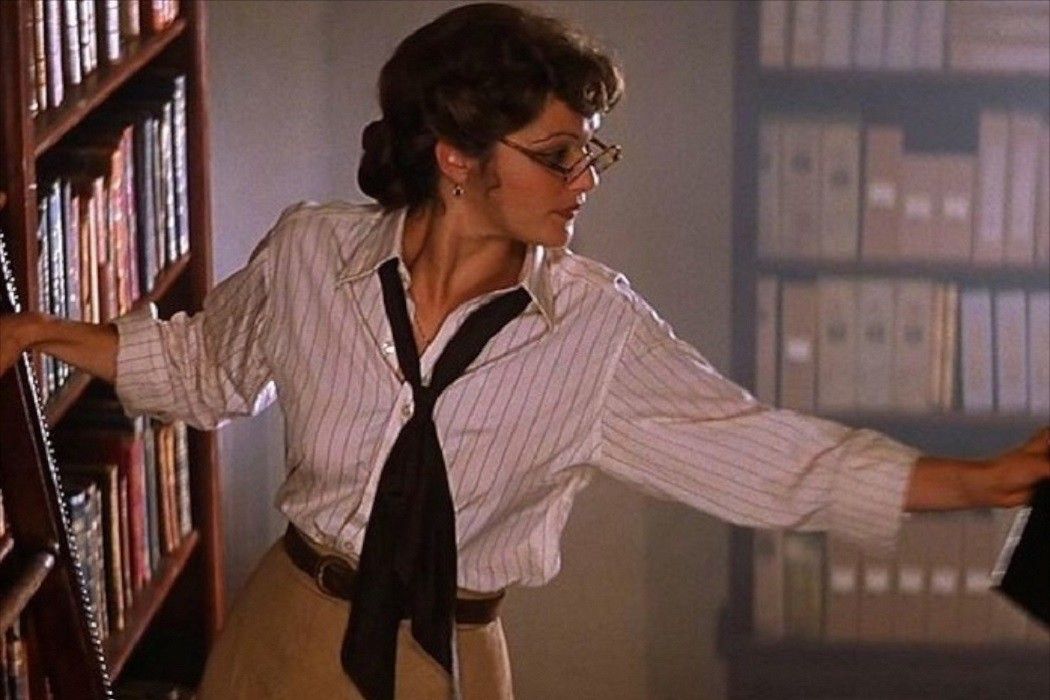 It’s back to school time, which makes it the perfect time to check back in with the Reel Librarian, Jennifer Snoek-Brown. With her help and deep reserves of information, we count down the very best librarians horror has in store.

Not a great movie, which is especially disappointing considering its pedigree. Segments in the Lovecraft anthology are directed by Christoph Ganz (Brotherhood of the Wolf), Brian Yuzna (Society) and Shûsuke Kaneko (Death Note).

Still, the wraparound story The Library – directed by Yuzna and starring that filmmaker’s favorite and ours, Jeffrey Combs – is much fun. Combs plays Lovecraft himself, visiting a very private library run by peculiar monks. He’s doing research. Or is he stealing the librarian’s key with hopes of finding the Necronomicon?

That is totally what he’s doing, and it’s a blast. Combs is great, but Tony Azito as the bemused/annoyed librarian is the real star here.

Are you a Poe fan? Well, it won’t matter because Ernest Morris’s period thriller bears little resemblance to Edgar’s classic.

So why include it? Because the murderer is a librarian! Laurence Payne plays brittle Edgar, a reference librarian who’s taken with his new neighbor, Betty (Adrienne Corri). He doesn’t know how to talk to women, but his best friend Carl (Dermot Walsh) sure does! And my, how Carl’s heart does beat loudly.

Corri’s exceptional in this film, but Payne is unlikable, entitled, perverted gold. This is an incel movie before we even knew what incel was.

Michele Soavi’s dreamy gothic Giallo, co-penned by Dario Argento and co-starring a very young Asia Argento – is no masterpiece. It is endlessly watchable nonsense, though.

Evan (Tomas Arana) shows up late for his first day as cathedral librarian, stopping to flirt with fresco restorer Lisa (Barbara Cupisti) before heading into the library where he will be brazenly lazy and more than a little creepy.

The film takes on the dreamlike logic of a Fulci without losing the more pristine visuals that mark Argento’s earlier films. Its underlying themes are kind of appalling (wait, we’re good with the inquisitors who murdered that village?), but it looks great.

Is it a horror movie? Well, it is a monster movie, so close enough. Stephen Sommers’s 1999 swashbuckler boasted fun FX, an excellent villain, the newly beloved Brendan Fraser, and one kick-ass librarian.

Rachel Weisz, more attractive than ought to be allowable, plays Evie Carnahan. Her opening segment of destruction in the library itself is sheer visual poetry, but she’s more than brains and clumsiness. Evie stands up for herself, outsmarts bad guys, accidentally reanimates ancient evil, and really loves her job.

There’s a reason Evie Carnahan and Charles Halloway top our list of librarians in horror. Because they are heroes, as are all librarians.

Jack Clayton’s take on Ray Bradbury wields nostalgia with melancholy precision, recognizes time as the enemy, and boasts exceptional performances from its villain Jonathan Pryce as Mr. Dark, and its hero, Jason Robards as town librarian and all-around good guy, Charles Halloway. The fact that the final showdown takes place right in the library is the icing on the cake.

One thought on “Fright Club: Librarians in Horror”