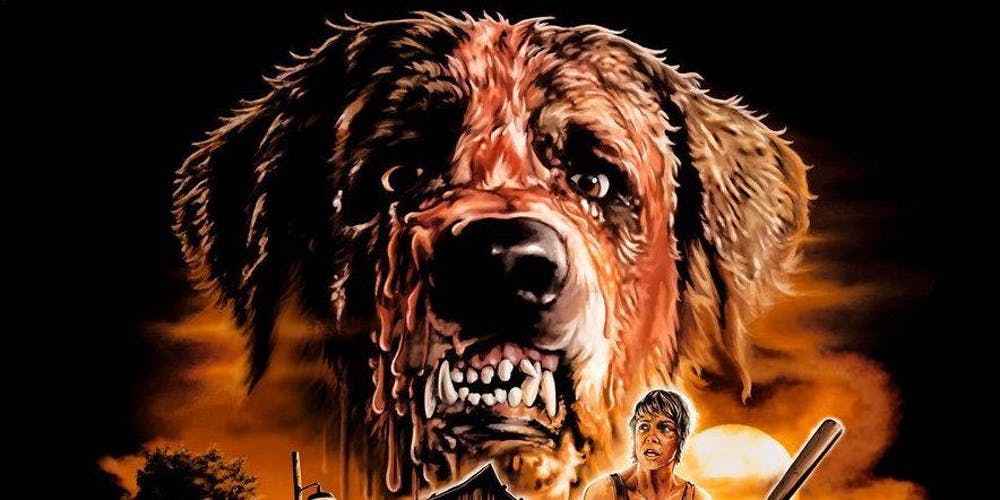 Whether used to terrorize us or to break our hearts, dogs add something powerful to a horror movie. Unless it’s Zoltan: Dog of Dracula, because nothing, not even the most gorgeous dog, could save that piece of poo. But these dogs, these dogs are keepers.

Maybe you haven’t seen Lucky McKee’s amazing, disturbing 2011 feminist horror The Woman? Get on it! But just in case, we’re going to avoid any spoilers, which means leaving you kind of wondering why this film made the list of best dogs in horror. Suffice it to say, the dogs are mentioned throughout but meeting them … well, please see this movie.

Though the film contains many faults, once Donna (Dee Wallace) and her asthmatic son (pre-Who’s the Boss Danny Pintauro) find themselves trapped in their broken down Pinto (What? Those seem like such reliable cars!) with a rabid dog (bigger than the car) attacking, the film ratchets up the tensions and rewards you for your patience.

Profoundly claustrophobic and surprisingly tense, benefitting immeasurably by Wallace’s full commitment to the role, the film traps us in the heat inside that Pinto and quickly makes up for the entire rest of the picture.

Billie F. Whitelaw, ladies and gentlemen. Her performance as little Damien’s new nanny really took things up a notch, didn’t they? Instantly, not only was Mummy (Lee Remick) unnecessary, but Daddy (Gregory Peck) found himself in a battle for Alpha—a battle that begins over a dog.

There are actually quite a number of great, terrifying dogs in The Omen, Richard Donner’s iconic Seventies horror. The dogs in the cemetery, the bones in the casket—what, exactly, was Damien’s mother, anyway? But Mrs. Baylock’s Hound of Hell—that’s when the unflappable Robert Thorn realized there may be things to fear inside his home.

Yes, there are scary dogs in horror movies, but more often than not horror filmmakers use dogs to break our hearts. Oh, sure, kill all the people you want, but once we hear that off-screen whimper, we’re bawling.

Tell us Sam’s death in I Am Legend didn’t gut you. No? Well, stay away from us you sociopath.

Horror has done us some damage in the way they treat dogs: Jaws, Raw, Snowtown, The Babadook, It Comes at Night, Greta, Audition, The Hills H ave Eyes, The Wailing, Hounds of Love. But we not only loved Sam, we recognized Robert Neville’s (Will Smith) aloneness, his vulnerability to grief and madness, because of Sam. That dog is the only reason this movie works.

But Mr. Whiskers (evil cat, also Reynolds) thinks Jerry is a cold blooded killer. And though Mr. Whiskers is OK with that, Jerry doesn’t want to believe it. So he should definitely not take his pills.

OK, not the new rescue dog on MacReady’s team. What a gorgeous boy he is, though. A perfect specimen, adaptable to Antarctica’s hostile climate, bred to survive. He makes those beard-tastic humans look positively vulnerable.