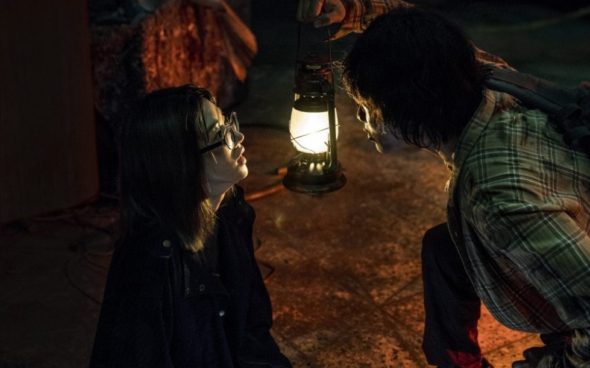 Warning: Do Not Play

Basing a horror film around the “scariest movie ever made” premise is ambitious. Is it smart?

Well, it’s ambitious. Because at some point, you’re going to have to show at least a snippet of this deadly frightening flick your film is referencing, and your audience is already poised to dismiss the impact.

Remember the “killer” tape in the The Ring? We had to see it, and if it didn’t totally creep us out when we did, the entire movie would have crumbled. But that video WAS creepy as Hell, giving The Ring the anchor it needed to stand as one of the best PG-13 horror flicks ever made.

Shudder’s Warning: Do Not Play remembers The Ring/Ringu quite well, building a familiar mystery around some urban legendary long lost film footage.

Mi-Jung (Ye-ji Seo) is a “film festival prodigy” on a two week deadline from a big South Korean studio to come up with a great horror script or she’s out.

Film students at the local university hip Mi-Jung to the legend of a graduation film from years earlier. They can’t remember the title, but it supposedly screened once, with repercussions so dramatic the film was rumored to be directed….by a ghost.

Mi-Jung asks for help in an online forum and is instantly met with an ominous demand to cease the inquiries, which only draws her deeper into the mystery.

Writer/director Kim Jin-won provides some nifty atmospherics in the early going, but little else to demand your attention. While Kim doesn’t rely on cheap jump scares (thank you), he pushes the unreliable narrator trope via enough “waking from a dream” sequences to quickly become tiresome.

But the blood and the body count pick up in act two, as the film adopts some Blair Witch tactics – and openly cops to it, which is nice. Mi-Jung finds herself deep inside the cursed production, and we’re left to sort out the psychological strands of her experience.

The film-within-a-film may never grasp the elusive Ring ambitions, but hang in past the setup and Warning delivers a competent mystery and some fun terror in the aisles.