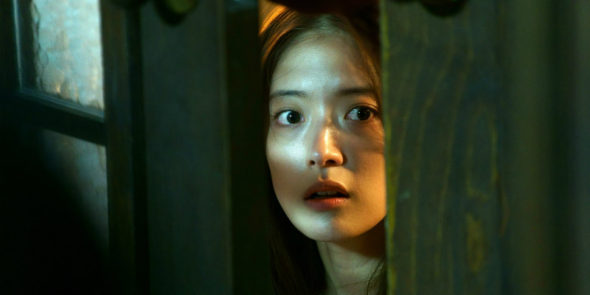 So there’s a big, old hotel that’s creepy now that it’s off season and no guests are around. There’s a little kid who likes to wander the halls of this empty hotel, and there’s one specific room that’s off limits.

This hotel’s in South Korea, though, not Colorado, so Lloyd the bartender must have had an expired passport.

Shudder premiere Lingering (originally Hotel Leikeu) finds Yoo-mi (Se-yeoung Lee) coming to the aid or her young half sister Ji-yoo (So-yi Park) after the death of their mother. Yoo-mi has no means to look after the child, so they head to Hotel Lake, which is run by “Auntie” (Ji-Young Park), their mother’s oldest friend.

The plan is to drop Ji-yoo off quickly, but Auntie invites Yoo-mi to stay awhile, where she’s quickly drawn into a mystery of missing persons, murder and one surly, drunken maid (Park Hyo-joo).

The director’s camerawork is occasionally fluid and effective, but most of the set pieces are more noteworthy for the atmospheric cinematography and sharp sound design that manage to punctuate the dark, empty rooms.

Lingering feels like it’s doing just that, hanging around after its welcome has worn. Holding attention becomes a problem, as does the lackluster payoff waiting at mystery’s end.

Maybe a guy in a bear suit would have helped.