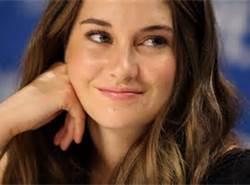 Shailene Woodley, the 21-year-old who stole scenes from Clooney in The Descendents, finally returns to the big screen with another awe-inspiring turn in this week’s The Spectacular Now. Woodley is part of a remarkable wave of young female talent worth celebrating. Therefore, this weekend’s countdown: 9 brilliant young actresses not named Jennifer Lawrence.

This nine-year-old boasts an Oscar nomination, a forthcoming historical drama co-starring Brad Pitt and Michael Fassbender, and the lead in the next silver screen version of little orphan Annie’s scrappy story. Her cherubic face and startling talent offers hope for the future of the industry.

Fourteen and brilliant (honestly – she’s a member of Mensa), Hayward made an impression as the heavily eye-lined lovestruck teen in Moonrise Kingdom. Let’s hope Hollywood knows how to make the most of her deadpan genius.

Sure, Kick-Ass 2 disappointed, but the hard-working Moretz doesn’t. Now 16, she has more acting credits than everyone else on this list combined. She’s played disdainful, vulnerable, mean, sweet, blood sucker and victim, and soon she’ll reprise the role Sissy Spacek made infamous. We can’t wait to see what she can do at the prom.

The touching, versatile younger sister in an acting clan, this 15-year-old may be the most impressive talent on the list. She has a quiet reserve that draws comparison to Meryl Streep – heady company, but Fanning may just be the one who can live up to it.

You may not know this impressive talent, but her first professional work in the Oscar nominated War Witch proves her uncanny natural ability. Her devastating, understated performance marks the work of a natural artist and we are eager to see her follow up.

She received her first Oscar nomination at 16 for a powerhouse performance that stood up to the likes of Matt Damon and Jeff Bridges in True Grit. She’s been quiet since, but she’ll churn out an impressive number of films in the next two years, including a starring role in Romeo and Juliet this February.

Oscar nominations, action flicks, period piece drama, teen angst pics, accents aplenty – this chameleonic 19-year-old can seem to handle anything. She’s been an international acting force since childhood and we are eager to see what adulthood brings.

Another unfamiliar name, perhaps, but 20-year-old Roendahl made the world take note when she brought tender resilience to the devastating war pic Lore. Like Fanning and Mwanza, she suggests a quiet, wary wisdom with her performances that should help her carve out a brilliant career.

And back to Woodley, 21, a refreshingly natural performer whose choices mark someone who wants to act rather than someone who wants to be a star. Like her impressive colleagues on this list, she offers hope to those of us who love movies and thrill to see the next generation of Streeps, Blanchettes, Winslets, Moores and Closes begin their cinematic takeover.

Subscribe in a reader
← Being in Love Means Never Having to Say “Slow Down!”
Pub Crawl Interrupts Review of Movie About Pub Crawl →
Scroll Up