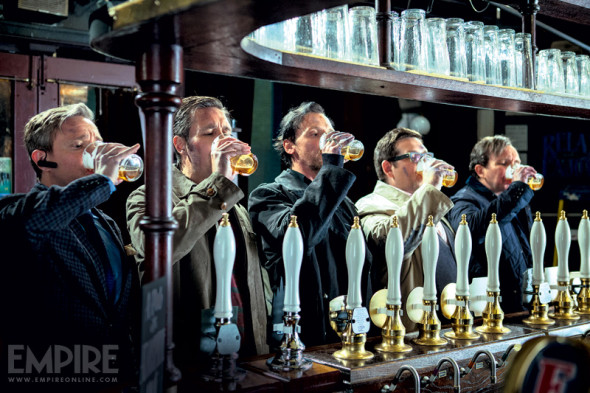 After successful romps thru zombie flicks (Shaun of the Dead) and cop dramas ( Hot Fuzz),  Simon Pegg and company finish up their “Cornetto Trilogy” with The World’s End, a wild science fiction sendup that will put you in the mood for a cold beer.

Lost soul Gary King (Pegg, who also co- wrote the script) feeds the nostalgia for his youth by rounding up his old gang and convincing them to finish a job their younger selves never could. In 1990, they fell short of competing the local pub crawl known as “The Golden Mile”:  twelve pints in twelve bars, concluding at a watering hole called The World’s End.

They meet in their old hometown and begin the task, only to find that things have changed…to the tune of invasions and body snatchers.

While never laugh out loud funny, The World’s End does provide plenty of fun, mixing tongue in check nods to the sci-fi genre with frenetic action and age old lessons about going home again.

If that sounds a bit all over the place, it is. Director/co-writer Edgar Wright can’t seem to find a pace that suits him, instead opting to just try a little bit of everything and see how that works. Though the film sputters a bit getting out of the gate and suffers some misfires in character development, it actually manages to come together pretty well.

Oops, gotta run…our plane just landed in Key West and we’ve got a pub crawl of our own to start.