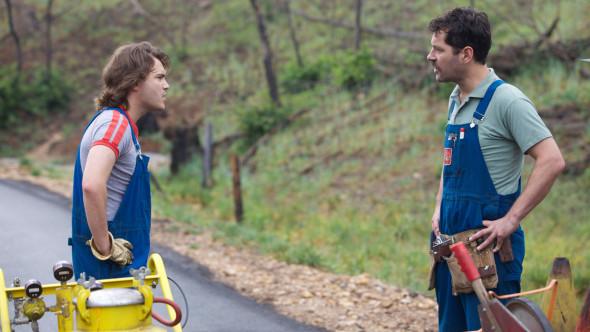 David Gordon Green is a curious filmmaker. Beginning his career with poignant, Southern independent films, he is perhaps best known for the breakout hit Pineapple Express and subsequent bombs Your Highness and The Sitter. He returns to the world of offbeat indies with Prince Avalanche – a film about as offbeat and indie as any you will ever find.

Alvin and Lance (Paul Rudd, Emile Hirsch) spend the summer of ‘88 doing roadwork in an isolated, wooded area recovering from the years-old and miles-wide devastation of a wildfire. They’re just two goofy dorks in blue overalls arguing over their “equal time boombox agreement” and painting yellow stripes, mile after mile, week after week.

Avalanche is as sweetly odd as it is casually gorgeous, the wild beauty of the duo’s surroundings an absurd backdrop to their own screwball behavior. It’s a buddy comedy of the most eccentric sort.

Green’s unconventional approach allows Hirsch and Rudd ample room to breathe, and to develop unique and fascinating characters. Rudd’s peculiar Alvin nicely counters Hirsch’s silly Lance, and their placement in this vast wilderness feels so entirely counter intuitive that their adventure takes on an almost surreal humor. Both actors are a joy in a film that commits to taking you places you’ve simply never been.

Green based the screenplay on Hafsteinn Gunnar Sigurossen’s much lauded but little seen Icelandic picture Either Way. The meandering pace he gives the work serves its overall themes, but will aggravate a lot of viewers – particularly those seeking a plot. What we get is a generously documented, lovingly observed character study of two outsiders with little in common beyond their own troubles with human contact.

When Green remains focused on the absurdity of the situation, Prince Avalanche charms the impatient viewer into submission. It’s only when he falls back on his own roots in indie cinema – poetically capturing the languid beauty and rustic living – that the slight production feels tedious.

Still, I cannot imagine a more potent antidote to Summer Blockbuster Fever and its symptoms of FX bloat star dazzle than this spare, offbeat film.