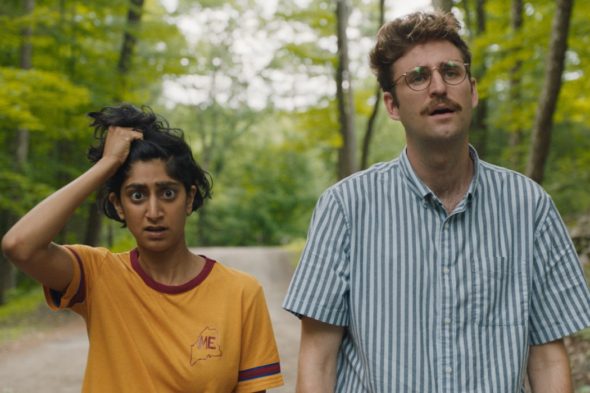 “The world is f*cked and we should stop pretending it’s not.”

This piece of insight comes from Su (Sunita Mani), one half of the Brooklyn couple who’s disconnected to enjoy a week in nature, away from the distractions of a life spent too much online. Yes, Su has brought an internet list of ways to improve as a couple, but she handwrote the list into her notebook, so it’s OK.

Meanwhile, longtime (maybe too long?) boyfriend Jack (John Reynolds, Stranger Things) is jonesing to YouTube his tips for humanely trapping a rabbit. But he will not give in!

No, the two are committed to staying off the grid and offline this week, no matter the cost.

Naturally, this is the week the world ends.

Writers/directors Alex Huston Fischer and Eleanor Wilson, a couple themselves, create a comfortable, hipster vibe. Su and Jack’s relationship is funny in a way that feels less like cynicism and more like compassionately self-referential mockery.

Both performances are charmingly irritating, if that’s a thing. It is here, which could be hard to sell but it’s imperative in this film. The couple is lightly self-obsessed and overly sensitive—an affectionate rip on millennials—but they are sincerely fond of each other, and we are, in turn, fond of them.

Things get sillier once the threat exposes itself. The earth has been overrun by fuzzy little puff balls the couple refers to as pouffes. Yes, the harmless looking—adorable, even—mayhem does feel remarkably similar to those tribbles that caused the Star Trek crew such trouble back in the day.

That’s not the only part of the filmmakers’ feature debut that feels somewhat borrowed, but don’t let them fool you. Just when you think the film itself is selling out, promoting a status quo, nuclear family vibe that would sink the entire production, nope.

The lighthearted cynicism and dystopian dread that marks a generation rears its pessimistic but nonetheless delightful head for an end that’s an unsettling mix of optimism and desperation.