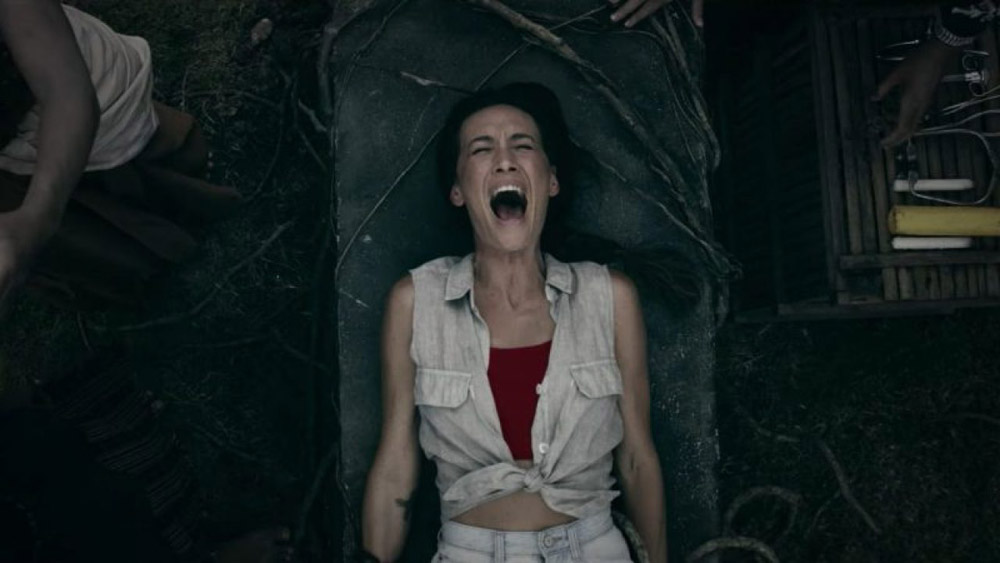 From director Darren Lynn Bousman (Saw II-IV, Repo: The Genetic Opera) comes a vacation horror romp that will bring you some thrills and chills. Nothing more, nothing less.

The highlight here is certainly the gorgeous island setting, which is a welcome departure from haunted houses and summer camps with bad reputations.

The panic begins when a vacationing couple (Maggie Q, Luke Hemsworth) on a remote island realizes they remember nothing from the previous night. The rather chilling race to get answers showcases some intense visuals and surreal editing techniques that help add excitement to the predictable—if surprisingly brutal—twists.

If you are a full on horror fanatic, you will probably have at least a decent time here. The film breaks no new ground but it hits its marks rather decently. The whole, “everybody knows whats going on except you” set up owes a lot to classics such as Rosemary’s Baby and The Wicker Man.

It’s also not hard to imagine that the success of Midsommar was a factor in greenlighting this film. It similarly attempts to incorporate a modern theme or two, including a very light commentary on consent and free will, which if fleshed out a bit more could have added some potency and depth.

Also sorry to be that guy, but in 2020, do we really need another film where island natives are portrayed as little more than villains who delight in the torture of the “civilized” Americans? It’s a hypothetical question, the answer is: no, probably not.

What Death of Me lacks in originality it sometimes makes up for with intense visual flourishes and dream sequences, but by the third or fourth “was it a dream or did it really happen?” moment, the horrific scenes begin to lose their sense of danger and traumatic permanence. Because of this, the film starts to flounder a bit in the middle section, just before we reach the rather satisfying, bloody climax.

It’s way off course from being a masterpiece, but for fans of the genre stuck inside during these COVID-19 days, you could do worse than this film that teleports you to a beautiful island for a few bloody thrills.