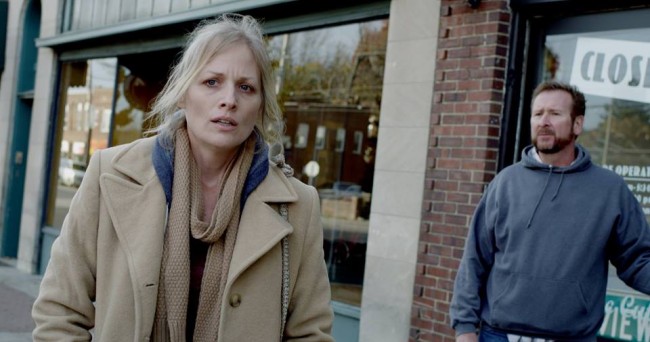 You may recognize the voice and know the name, but that doesn’t mean you know Dino Tripodis. The longtime Sunny 95 morning man has been involved in Columbus film for years, and you’ll get the chance to see that first hand at the Columbus International Film & Video Festival this weekend.

Tripodis produces, co-writes and co-stars in director John Whitney’s locally shot indie drama The Street Where We Live, which is set to premier at the festival on April 21. The project began at Tripodis’ home as the two men lamented the sudden cancellation of a different film project due to backer issues.

“John and I were sitting on my front porch and John said to me, ‘Screw it man, let’s just make a movie with our friends and family,’” Tripodis remembered.

Whitney added, “I was like, ‘Yeah we’ll do four people maximum cast, maybe two or three locations.’ Didn’t quite work out.”

The resulting effort evolved into a full scale feature, set in and around Columbus and boasting a cast of more than 80 actors.

“It turned into a much bigger cast with a lot more locations,” Tripodis confirmed. “But, the simple idea was of getting our friends together: the actors, cinematographers, lighting people, sound people — everybody that was good at what they do. Getting them involved, knowing that we have practically no money and we’re doing this out of the love of making film.”

“I gotta throw some props over to John,” Tripodis continued. “John’s done a lot of great work in the past, and I think a lot of people wanted to work with him because he’s a good director. I think that was part of the draw for some of these people — to work on a Whitney project.”

It’s a tough way to go about making a film, but the duo is proud and pleased with the result. The Street Where We Live tells the story of a family caught in sudden economic troubles, with potentially devastating results.

“During that time period — about two and a half years ago when we were coming up with this story — there was a lot in the news about people reaching the end of their unemployment. What do they do next?” Tripodis said. “They don’t have a job, and people are dropping off unemployment, basically falling out of the system. I thought it would be interesting if we tried to tell a slice of that kind of story.”

“It’s a story about a woman trying to keep her family together as best she can in a very difficult situation,” Whitney said. “It’s a dramedy. There are some light moments along with some poignant moments.”

And the whole package is 100 percent Columbus?

“Oh yeah,” said Tripodis. “Everybody involved was from Columbus. Everything was shot in Columbus, a large part of it shot in Clintonville. I’d say close to 80 percent of it is Clintonville, with a couple other locations on the west side and a couple shots in Arlington.”

“Gotta give props to everybody that helped us out in locations,” Tripodis continued. “Whether it be at the hardware store or the body shop or a bar or homes.”

“It was an all-volunteer army. We only wanted like-minded people to be involved in the project,” said Whitney. “In the course of a year we shot over eight or nine weekends. About once a month we’d get together for a couple of days and shoot a couple scenes – knock out 15, 18 pages, and then prep for the next month.”

“Which we will never do again,” said Tripodis. “Ever.”

Check out The Street Where We Live this Friday, April 21 as part of the Columbus International Film & Video festival. The film screens at 8:30 p.m. at the CCAD Canzani Center Screening Room.

For tickets and information, visit CCAD.edu.