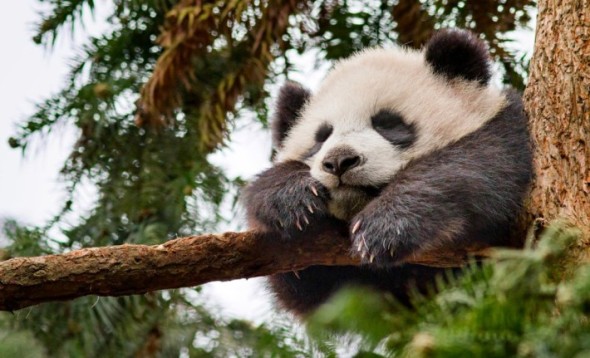 Disney could put that on the marquee and probably score a box office winner, but they chose a more subtle approach for their latest Earth Day release: Born in China.

Oh yes, plus plenty of other baby animal cuteness to sell a very family-oriented lesson in the circle of life. And while this emphasis on the youngest of the litter extends to the film’s approach to its audience, director Chaun Lu and a team of wonderful cinematographers capture truly stunning images that take us inside habitats still unknown to most humans.

But more than perhaps any other release from DisneyNature, Born in China undercuts the brilliance of its pictures with overly simplistic, often manipulative storytelling.

Alongside the pandas, we follow a snow leopard struggling to feed her cubs, a young monkey feeling jealous of his new baby sister, and a giant herd of migrating antelope. The film’s 75-minute running time feels even more hurried through Lu’s impatience with the very world he is unveiling. Cheesy reaction shots are often spliced in for comic effect, while some dramatic sequences seem manufactured through very selective editing, such as when a baby monkey is under attack from a swooping bird of prey.

John Krasinski’s narration too often carries more annoyance than charm, due mainly to writing that is shallow and forced. The animals aren’t just given names for our benefit, they’re given imagined thoughts and motivations, blurring the actual drama of this rarely seen world. There are natural wonders here, but Born in China reduces its stars to glorified cartoon characters waiting to be marketed alongside Dory and Buzz Lightyear.

It is worth staying through the credits, as some behind-the-scenes footage gives glimpses of what it took to grab such unforgettable footage. By the time you get there, though, you’re wondering how much more powerful the pictures could have been without words getting in the way.