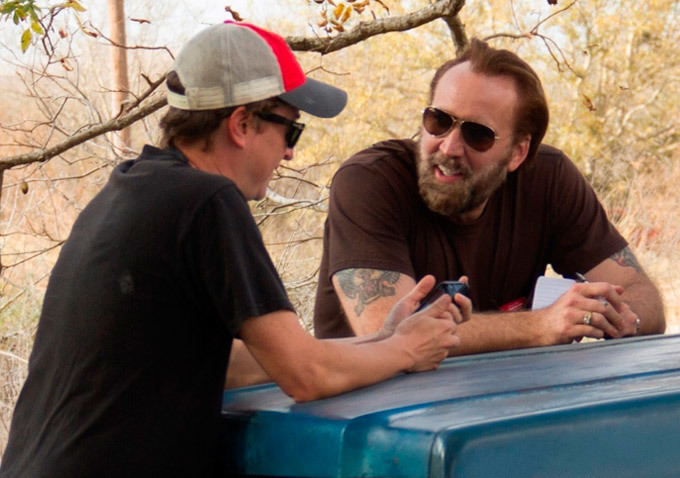 About seven years into filmmaker David Gordon Green’s career, it seemed like he’d found his niche with lyrical, Southern tales that braid poverty with nature, resilience with melancholy. And then he directed the Seth Rogan/James Franco flick Pineapple Express.

Yes, DGG shook free from that ultra indie aura and dove into Hollywood comedies, and even TV, directing many episodes of Danny McBride’s hilariously wrong HBO series Eastbound and Down. Lately, though, he’s returning to his cinematic roots, as evidenced by his latest effort, Joe.

The filmmaker returned to the Wexner Center of the Arts in March to screen the film, which opens nationwide this Friday. He took a few minutes to talk with MaddWolf.

MaddWolf: The last time I got to talk to you was just before you screened Snow Angels at the Wexner. Now you’re here with Joe. How does the Wex keep getting so lucky?

David Gordon Green: I’ve got some friends there, and the people there are interested in my work. Plus, I always look forward to creative ways to exhibit my movies, not just the obvious ways. So it’s nice to come out to Columbus, show some Eastbound and Down episodes that I worked on, and then present the movie. I enjoy doing that.

MW: Back then, with Snow Angels, you told me you were interested in doing some big Hollywood type movies. You have done that, as well as TV since then. And then you did Prince Avalanche – a delightful, decidedly non-commercial effort. What drives you artistically?

DGG: It just depends how I wake up in the morning, what my dreams were like the night before. I really do work in a kind of whimsical way. I have a great work ethic and I wake up and start working on things. Just as you turn on the radio and tune to a station that you’re feeling, I kind of turn my work efforts to a specific medium that I’m drawn to at that moment. Then I chip away at things until, at a point, something becomes real.

If I’ve got ten things in development – at least in my brain – some of them formally, some of them informally – at a point, something becomes real, and then I really commit to it and give it all my focus and attention. Sometimes that’s radically different from what I’ve just done because I’ve needed that shift in tone or texture or mood in my life.

MW: That kind of sounds dreamy. Is it the greatest thing ever?

MW: Do you prefer one medium to another?

DGG: They all have their advantages. It’s nice to have resources and commercial possibilities, reach a wide audience. It’s amazing seeing a line around the block for a movie you’ve worked on. It’s awesome to have all the toys in the toy chest that you can play with during production, and everyone gets paid.

Other times, it’s nice to make a personal statement and just worry about you and your immediate collaborators. Or, with the opportunities of television, it’s nice to be able to follow a character over a long period of time with some nontraditional arcs of storytelling. It’s very satisfying.

MW: When you set to work on Joe, what made you think of Nicolas Cage?

DGG: When I read the book about 15 years ago, I always imagined Robert Mitchum in his younger days playing the role. When I got serious about making the project, I was trying to think of someone who was a leading man type that was capable of the action and physicality, was capable of the drama and prestige that I was hoping we would shoot for, and also had a sense of humor about him. Cage is the only leading man that has successfully worn all three of those labels as a movie star. He was the first guy I spoke to about it and it was exciting to have him respond to it enthusiastically and immediately.

MW: He has proven in glimpses that he’s among the most talented actors working, but it’s easy to forget that. He’s gotten really strong reviews for his work in this film. What do you think it is about this project or character that brought it out in him?

MW: Tye Sheridan is proving to be an amazing talent. How did he wind up in the project?

DGG: I was a big fan of what he did in Tree of Life. When I saw that, he really popped out at me as the gravity of that movie, the real emotional connection. And then my friend Jeff Nichols was editing Mud and I was helping him out, and we just started talking about it.

Jeff knows the novel Joe really well – Jeff and I worked together as production assistants on a documentary about Larry Brown’s (author of the source novel) life. So he knew Larry, knew I really wanted to find that right young voice, and Tye was coming into the right age. I really liked Tye’s ideas for the characters, and he can improvise really well, which is important to me.

MW: You did not write this one. Gary Hawkins – the documentarian who made the film you mention about Larry Brown – adapted the novel written by Brown. How did this come about? Did the screenplay exist before you were attached?

DGG: I think after Larry passed away, Gary wrote the adaptation as a kind of a tribute to Larry and he sent it to me when it was done. I loved it. I fell in love with it and I thought, well, this is the right time in my life and my career. It’s very ambitious in a lot of ways. I think, for the directorial tools I needed, this was the point I felt confident in it.

I’ve been kicking this around for about four years, I guess.

DGG: It was amazing. With someone as seasoned as Nic, and one as young and hungry as Tye, they just complimented each other really well. And then the rest of the cast is mostly nontraditional actors and some street performers and some day laborers that we hired – it was just a fun, eclectic ensemble. We had a really good time. We did go to some really difficult dramatic places, so it’s nice to have people you can trust and have a laugh or a drink with at the end of the day.

MW: What’s next? You going to direct a play?

DGG: I’m just finishing up a movie with Al Pacino and Holly Hunter called Manglehorn. I wrote this with Al in mind, created the character for him. In a lot of ways it was me trying to dig back to some of his early Seventies performances – Panic in Needle Park and Scarecrow – some of the less bravado, more vulnerable roles he’s played. This is 100% Pacino. He’s in every frame, and it was a lovely, wonderful education for me in a lot of ways and inspiration in every way.

MW: Like Cage, Pacino – clearly one of the all time greats – has done some really questionable work over the years. Was it a specific goal for you to put these guys in the position to do great work again?

DGG: Absolutely. They are some of the greatest actors of all time, and rather than trying to rally Channing Tatum or Bradley Cooper to come be in a movie, I thought, let’s find the greats of the greats at a time where they’ll take my phone calls and we’ll go do something that’ll rock the world.