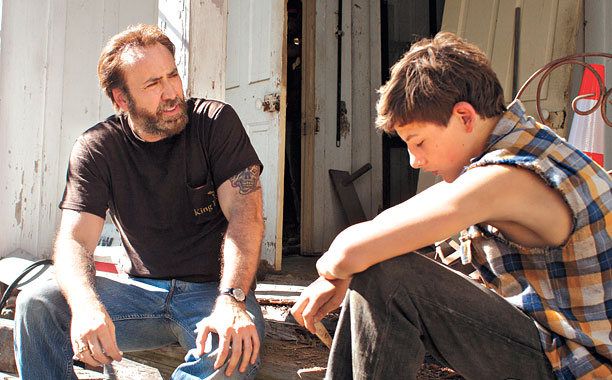 After seven years of exploring the big budget, big star world of Hollywood, filmmaker David Gordon Green revisits his ultra indie roots. He hasn’t returned alone, though. For his newest effort, Joe, he brought with him Hollywood staple and Internet joke Nicolas Cage. And God bless him for it.

As the eponymous Joe, Cage reminds us that he picked up that Oscar for a reason. He dials down the bug-eyed mania of many recent efforts in favor of a textured performance that emphasizes his natural chemistry with other actors, his vulnerability and barely caged rage, and his weirdly charming sense of humor.

Joe’s a good-hearted guy with a lot of issues, a volcano that’s never fully dormant. It’s part and parcel for a sun dappled, visually lovely film absolutely saturated in violence. While Joe bursts into less outright carnage than many films, the pervasive dread that violence could erupt at any second is the very air the film breathes.

In the middle of this modern Wild West atmosphere, Joe befriends a boy in need of a mentor. Gary is played by the increasingly impressive Tye Sheridan. With just three roles under his belt – Tree of Life, Mud, and Joe – Sheridan has proven to be an amazing natural talent. In his hands, Gary’s youthful exuberance is equal parts darling and tragic, given his circumstances. Sheridan’s performance is amazing, and his repartee with Cage is perfect.

Both are helped by an excellent ensemble, many of them nonprofessional actors. One particular stand out is a sinister Ronnie Gene Blevins as the oily Willie. But no one in the film can outshine street performer turned actor Gary Poulter. His turn as Gary’s drunken father offers more layers than anything a seasoned actor has offered yet this year, each one as believable as it is shocking. His performance is stunning, and it elevates the film immeasurably.

The film is not without its faults. Several characters are severely underdeveloped given their ultimate place in the story, and there are times when Cage cannot match the naturalism of the performers around him. The film also suffers from its resemblance to Mud, Sheridan’s 2012 cinematic of coming-of-age poetry.

But Green’s once-trademark touches – meandering storyline, poetic score, bruised masculinity – are in full bloom as he reworks Larry Brown’s novel into his own unique vision of low income Americans’ melancholy struggle. In doing so, he’s reestablished not only his own artistic authority, but Cage’s as well.