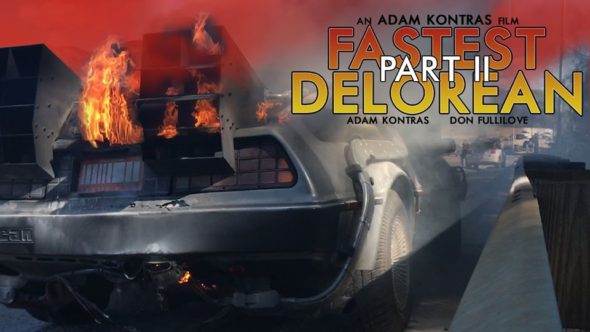 When we last saw Adam Kontras and his record-setting Delorean, one of them was on the side of an L.A. freeway engulfed in flames.

Fastest DeLorean in the World ended with that fiery cliffhanger, and now Kontras is back to finish the story with his second documentary feature, Fastest Delorean Part II.

Kontras, a Columbus native who bought the Delorean and turned it into a stunning replica of Marty McFly’s Back to the Future time machine, has for years been making his living in L.A. by renting out the vehicle for a variety of gigs.

That led to a desire for setting the Delorean speed record, which Kontras chronicled to stirring effect in Part I. But aside from all the cool car stuff, what really drove the first film is the human drama that developed between Adam and his gearhead brother Kenny.

The status of their relationship was as much an unanswered question as the car fire, and Kontras readily admits his sequel won’t mean much to anyone who hasn’t seen the first film.

“It’s the rightful conclusion to everything,” Kontras said.

Plus, from the Universal Studios backlot to Paris and beyond, we get first person accounts of the often amazing places the car has taken Kontras and his good friend Don Fullilove, who played Mayor Goldie Wilson in the Back to the Future films.

“Just like the first one, I’m very happy as a storyteller to have somehow pieced it all together,” Kontras said. “The scope of everything is pretty intense…but holy fuck, I wish I wasn’t in it.”

“I am so done with the drama, I did everything humanly possible to make Fastest DeLorean a nice redemption story.”

“There will not be a part III.”

There will be more documentaries, though. Kontras is set to announce his next project in January, one he describes as “a love fest that has nothing to do with family.”

Okay, but what about time travel?