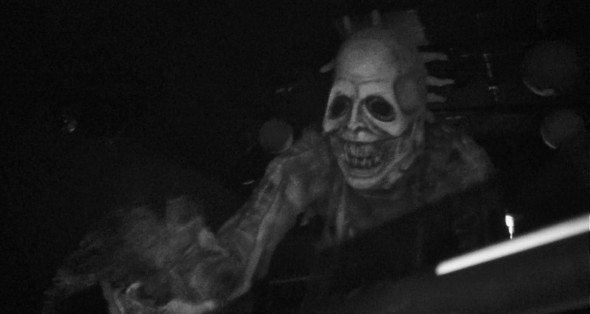 A ten foot tall demon, devil possessed mistresses, and lizard-like aliens. All promise a terrifying movie experience, but does The Dark Tapes succeed?

Vincent Guastani and Michael McQuown’s film is a found-footage anthology documenting “transdimensional entities.” The first couple stories are enjoyable – I’m glad they reserved the better actors for these sections.

The remaining stories, however, couldn’t keep my attention. Unfortunately, the acting quality distracted greatly from their plots.

It’s a good thing there isn’t much to miss out on anyway. The installment “cam girls” has some of the worst acting in the whole film. I have to give the actors some slack though, seeing as they didn’t have much to work with. The script was unbelievably bland and predictable.

Same goes for “Amanda’s Revenge,” which gives little explanation as to what exactly is going on. This would normally be fine as long as enough is given to allow the viewer to run free with their own conclusions, but there just isn’t enough substance to formulate one’s own theories.

Each storyline in this film goes for the unexpected twist at the end, and these two simply fail to surprise.

With that aside, not every short in the anthology is lacking. The complex science behind the “To Catch a Demon” storyline required all my attention, and the eerily convincing demon was able to keep it. Kudos goes to Guastani for special effects and creature design.

The end of “The Hunters and the Hunted” left me pleasantly surprised. Initially my notes read, “not unlike every other ghost hunting film.” Which I subsequently had to cross out after a major twist.

The Dark Tapes proudly states that it’s the found-footage horror movie with the second most awards and nominations, coming in at 61. As a whole, this film failed to be up to par with others in the genre, such as Paranormal Activity.

It certainly was a valiant effort, but they should have focused on those couple storylines with potential and ditched the rest.