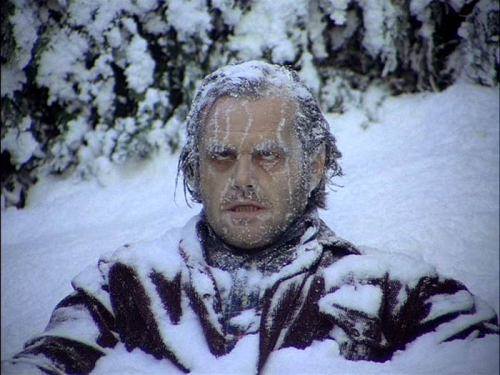 We’re buckling under blustery weather and offensive temperatures. I require more degrees! Why not just embrace the White Death? These five films certainly do, so snuggle in with a big blanket and look at how much worse you could have it in this wintery weather.

No, not the Disney film. In this skiing mishap, three friends hit the slopes one afternoon. They con their way onto the lift for one last run up the hill. But they didn’t really have a ticket to ride, you see, and the guy who let them take that last lift gets called away and asks a less reliable colleague to take over. That colleague has to pee. One thing leads to another. So, three college kids get left on a ski lift. It’s Sunday night, and the resort won’t reopen until Friday. Wolves come out at night. This is a brisk and usually believable flick. Sure, it’s Open Water at a ski resort, but that doesn’t mean it doesn’t work.

If vampires can only come out at night, wouldn’t it make sense for them to head to the parts of the globe that remain under cover of darkness for weeks on end? Like the Arctic circle? The first potential downfall here is that Josh Hartnett plays our lead, the small town sheriff whose ‘burg goes haywire just after the last flight for a month leaves town. A drifter blows into town. Dogs die viciously. Vehicles are disabled. Power is disrupted. You know what that means…the hunt’s begun. Much of the film’s his success is due to the always spectacular Danny Huston as the leader of the bloodsuckers. His whole gang takes a novel, unwholesome approach to the idea of vampire, and it works marvelously.

Honestly, you can’t go wrong with either the 2008 Swedish original or its 2010 American reboot Let Me In. We’re leaning toward the original here only because director Tomas Alfredson made such effective use of the Swedish winter. Young social misfit befriends the mysterious new girl in his apartment complex. A sweet yet bloody romance blossoms. Whether you choose the original or the remake, a brilliantly told, often genuinely scary vampire flick emerges.

You had us at “Nazi zombies.” A fun twist on cabin-in-the-woods horror, this film sees a handful of college kids heading into a remote mountain cabin for some winter sport fun and maybe a little lovin’. Dead Snow boasts some of the tongue-in-cheek referential comedy of the outstanding flick Cabin in the Woods, but with a great deal more actual horror. It’s grisly, bloody, hilarious fun.
http://www.youtube.com/watch?v=ZJkd5X2aG34

For our money, this is John Carpenter’s best film – isolated, claustrophobic, beardtastic, and you can get frostbite just watching. A group of Arctic scientists take in a dog, but he’s not a dog at all. And soon, most of the scientists are not scientists, either, but which ones?! The FX still hold up and so does the chilly terror.
http://www.youtube.com/watch?v=uoAuJaN78Hk

Because that’s what could happen if you wander outside right now. You might find yourself lost in a maze, icicles hanging from your eyebrows, your bloody axe frozen to your cold, dead hand. Not that anyone inside is much better off. Enjoy Stanly Kubrick’s masterpiece of family dysfunction, Gatsby-style partying, Big Wheel love and bad carpeting. It’s never a bad time to watch The Shining.