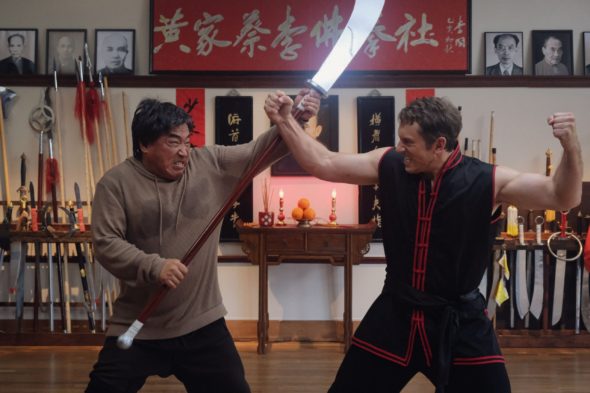 That’s not how any middle-aged man wants to be described, least of all a man who was once one of The Paper Tigers.

When Danny (Alain Uy), Jim (Mykel Shannon Jenkins) and Hing (Ron Yuan, Mulan) were in their prime, they were disciples of Chinatown’s great kung fu master Sifu Cheung (Roger Yuan, veteran of martial arts films). They couldn’t be stopped—certainly not by that poseur Carter (played with relish as an adult by Matthew Page).

But that was then.

It takes a murder mystery to convince the trio to a) talk to each other again, and b) fight. But first, they will really need to embarrass themselves.

Writer/director Quoc Bao Tran makes his feature debut with this family-friendly coming-of-middle-age comedy. Though the story itself is stridently formulaic, solid instincts for lensing physical comedy, as well as charming performances, elevate the film.

Uy offers a reliable center for the story. A relatable everyman, Danny’s lost focus on what matters, and Uy’s understated performance creates a nice counterbalance for some of the zanier moments in the film.

Page and Ron Yuan—whether together or separately—shoulder responsibility for most of those moments of lunacy. Yuan delivers an underdog you’re happy to cheer on, while Page’s comic foil is an embarrassing, irritating joy  to behold.

The writing is sometimes suspect. Formula makes up for a tight structure—you know where things are headed, even if not every step in the journey makes a lot of sense. But The Paper Tigers makes up for those missteps, mainly with affability and good nature. This is a hard film to root against.