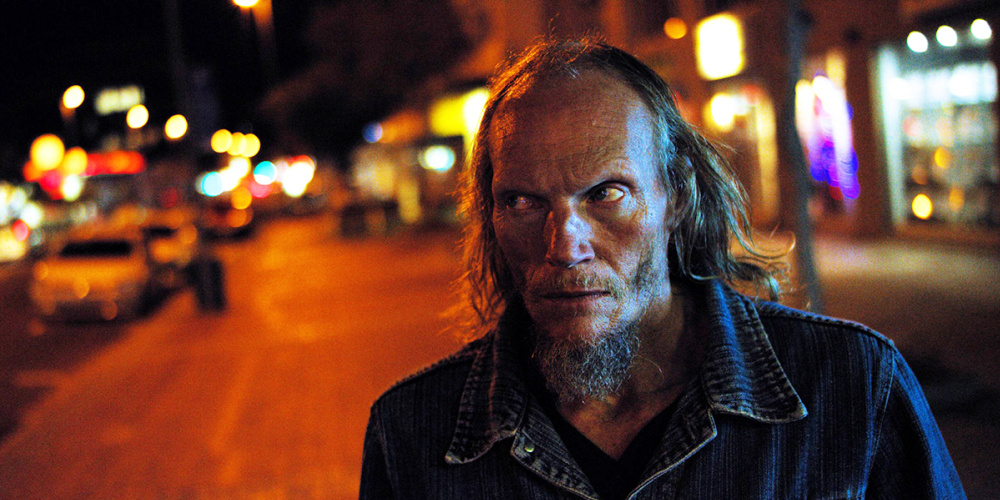 So, Fried Barry then.

Four years ago, South African writer/director Ryan Kruger made the 28th short film of his young career, a quick and experimental one-man meth attack starring Gary Green called Fried Barry. On the merits of Kruger’s vision for harrowing realism underlying a scifi vibe, as well as the startling central figure (Green is quite something to gaze upon), the short film made a big impact.

It’s also a single scene of a profound reaction to a drug. Not a lot to build on, and yet that’s just what Kruger does in his feature of the same name, streaming this week on Shudder.

Green returns as a Cape Town low life whose latest high is complicated due to an alien abduction.

Kruger maintains an experimental feel, although his feature takes on more of a traditional cinematic structure. This primarily consists of Green—looking as disheveled, lean and imposing as ever—wandering wide-eyed and silent through Cape Town. Oh, the adventures he finds!

Most of them involve different women who are curiously interested in having sex with this obvious junkie. He must just smell so rank! Suspend disbelief. The movie is nuts.

It’s not entirely unique, though, as it continuously calls to mind Rolf de Heer’s notorious 1993 film Bad Boy Bubby—another Huck Finn style adventure about a man-child and the curiosities he stumbles into.

And to be honest, de Veer’s film is far more of a mind f*ck.

Fried Barry also conjures Terry Gilliam and Panos Cosmatos (top-notch purveyors of drug-fueled mayhem), and maybe even an especially high-octane Lynch. Which is to say, the film offers insanity to spare. Kruger’s episodic fever dream blends frenetic editing and a charged soundtrack into something harsher and harder than a psychedelic trip, but the film lives and dies with Green.