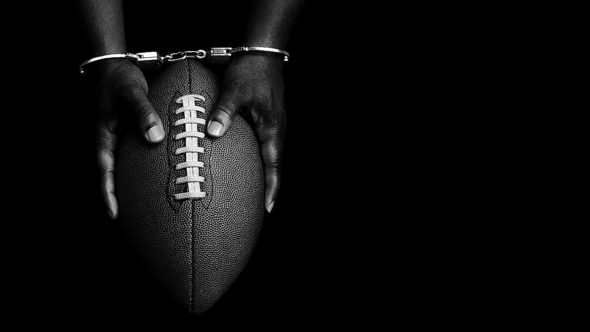 Anyone with two working eyes knows that the criminal justice system in the United States is far from perfect and rarely yields actual justice. The situation is even bleaker for young men of color. Even after their time is served, people convicted of a crime have a hard time finding work and maintaining new relationships.

As unfair as this is for everyone that goes through it, it can be especially grueling for people convicted of crimes they did not commit.

Brian Banks (Aldis Hodge) was once a star high school football player. He and his mother (Sherri Shepherd) had planned for Brian to attend college and hopefully make it to the NFL. All of that changed with a chance encounter that led to an accusation of kidnapping and rape. The barriers Brian faces after his release from prison lead him to a lawyer (Greg Kinnear) who might be able to clear his name and give him back his future.

Brian Banks is an interesting look at incarceration in that the film never once questions Brian’s innocence. In fact, the audience is clued in early on that Brian is a character we can trust. This film isn’t one that dwells on twists and turns. It’s more interested in Banks himself and what his plight says about our justice system. Unfortunately, that look tends to be one dimensional, and pushed through the lens of a mediocre TV movie-of-the-week.

Hodge (Hidden Figures, Straight Outta Compton) brings a humanity to this role that makes it easy to cheer for Banks despite the over-abundance of cliche. He does a wonderful job showing Brian’s frustration, hurt and disappointment all at once. It’s a tightrope performance, and Hodge pulls it off beautifully.

But there’s a cheapness to Brian Banks that makes it look like it would be right at home on the Lifetime cable channel. This is especially surprising since director Tom Shadyac spent the majority of his career making huge studio movies like Liar Liar, Bruce Almighty and The Nutty Professor. None of these films is exactly Lawrence of Arabia, but they still had a distinct visual flair.

Despite a strong lead performance, Brian Banks can’t overcome its reliance on age-old courtroom cliche and melodrama that ends up bringing the movie down. It’s a film that had something to say, but the message became muddled and/or lost along the way.