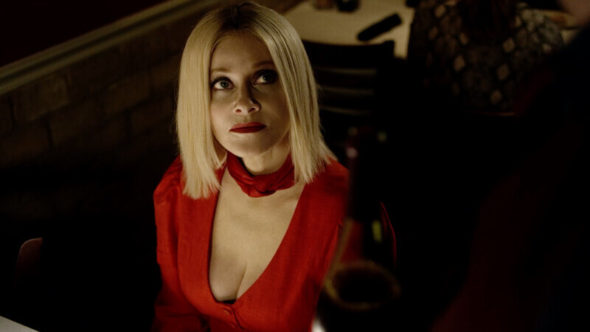 Her name is Anne Fedder. But Jakob’s Wife pretty much sums up the nearly invisible routine Anne (Barbara Crampton) is living.

Jakob Fedder (Larry Fessenden) is the well-known pastor of a small town church, and Anne is well known as his wife. Anne’s life seems to have only gotten smaller during her thirty-year marriage, and if pressed, she’d probably admit she wouldn’t mind a little shakeup.

A late-night meeting with old boyfriend Tom (Robert Rusler)? Intriguing, but his seduction skills got nuthin’ on The Master (Bonnie Aarrons, aka The Nun), who’s waiting on them both.

The next morning, Jakob gets the first clue that things will be changing.

“Did you make breakfast?” he asks.

At least not for pancakes. After The Master’s touch, Anne is a brand new woman, sporting fresh hair and makeup, tight, low-cut dresses and provocative new appetites.

It’s no wonder this has been a passion project for Crampton (who’s also a producer), and she makes the extended feminist metaphor ring gloriously true.

Director/co-writer Travis Stevens (Girl on the Third Floor) wraps the bloodlusty tale in a fun retro vibe of ’80s low-budget practical, blood spurting gore, but it’s Crampton (and the chemistry with her fellow horror vet Fessenden) who truly elevates this beyond the standard vampire playbook.

To see a female character of this age experiencing a spiritual, philosophical and sexual awakening is alone refreshing, and Crampton (looking fantastic, by the way) makes Anne’s cautious embrace of her new ageless wonder an empowering – and even touching – journey.

Stevens revels in the B-movie underpinnings, stopping short of tackling any systemic issues inherent in a woman’s longtime restlessness. The focus stays intimate, and only on how Anne’s new freedom affects Jakob and their local community (which remains nameless, though filming was entirely in Mississippi).

But with Crampton and Fessenden so completely in their element, Jakob’s Wife is an irresistibly fun take on the bite of eternity. Here, it’s not about taking souls, it’s about empowering them. And once this lady is a vamp, we’re the lucky ones.