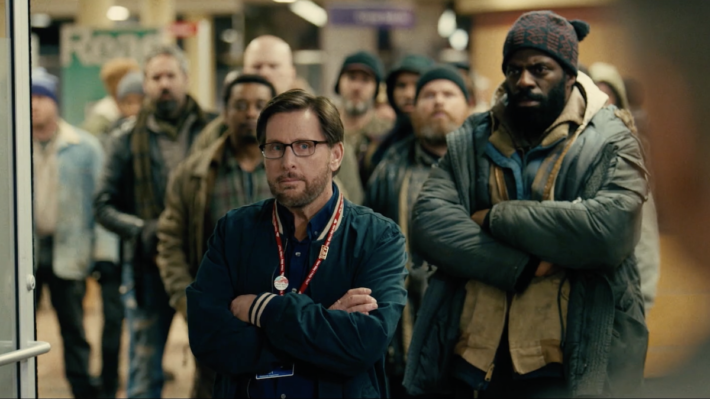 Emilio Estevez just does not do nuance.

The Public marks his fifth feature as writer/director, and it sports the conviction of his best work while also suffering from his familliar lack of restraint.

Estevez also stars as Stuart Goodson, a dedicated, stoic manager at the Cincinnati Public Library. While Stuart and his staff deal daily with an array of homeless citizens using the library, he finds himself a “good son” under fire when complaints about body odor lead to one vagrant’s eviction – and a lawsuit.

And then things get complicated.

Beyond the free computer use, the library also offers respite from the bitter winter cold, and when a deadly deep freeze grips Ohio, Stuart sits at the center of an armed standoff between the city and homeless folks needing shelter.

And it’s not just the homeless question The Public is addressing. From addiction and recovery to tabloid journalism, political cowardice and civic (ii.e. “the public”) responsibility, Estevez has plenty of heart available for numerous sleeves, getting admirable support from a solid ensemble cast including Alec Baldwin, Christian Slater, Jeffrey Wright, Taylor Schilling, Michael Kenneth Williams, Gabrielle Union and the ever-ageless Jena Malone.

Characters and subplots converge through dialog that’s too often desperate for authenticity, and a film that decries “intellectual vanity” seems overly proud of its own moments of clumsy enlightenment.

Case in point: a callous TV reporter (Union) is pumped at the social media traction she’s getting for her live reports from the library conflict. While her cameraman points out the plight of people at the heart of the story, she stays glued to her phone.

Point made, but Estevez can’t leave it there.

“Huh? What?” she answers, then a cut to the cameraman rolling his eyes. Second that.

Similarly, the stunt Estevez engineers for the big resolve gets a bystander explanation that is not only unnecessary, but factually dubious at best.

It’s just a culmination of the slow slide from good intentions to self-satisfied finger-wagging. The film has a respect for books and libraries that is indeed admirable, but by the time Goodson starts reading from Steinbeck on live TV, it becomes painfully evident what The Public wants to be when it grows up.