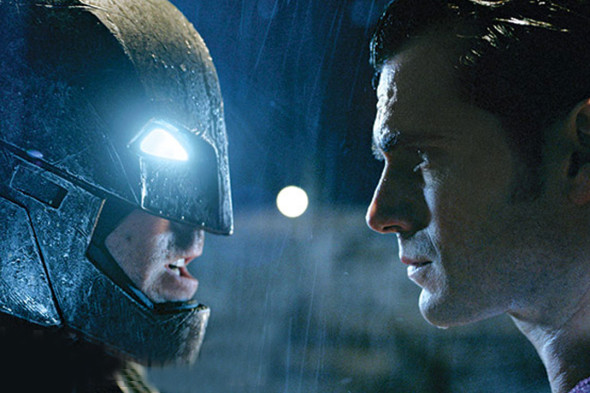 With Batman v Superman: Dawn of Justice, director Zack Snyder battles his own penchant for excess while combining the Marvel formula of assembly with the damaged psyche of Christopher Nolan’s Batman trilogy. And while Snyder is dealing with a few less avengers, his film makes Nolan look downright drunk on human kindness.

Utilizing an ambitious script from Chris Terri (Argo) and David S. Goyer (all three of Nolan’s Batman films), Snyder is not shy with metaphor or message.  As spectacular events unfold in Metropolis and Gotham, we’re given an unflinching rumination on how 9/11 has changed us.

Terrorism, paranoia, torture, and toothless media are woven into more standard superhero tenets. This is a battle between God and man, and the film also has plenty of moments worthy of a classic Greek tragedy.

So there’s a lot going on here? Sometimes too much. Ideas are plentiful and often repeated, as are dream sequences and Snyder’s patented wide angle slow-motion set pieces. And really, do we need another ‘young Bruce Wayne watches his parents get shot’ sequence?

Speaking of Master Wayne…after all the uproar, Ben Affleck makes a fine caped crusader, as the hero’s square-jawed intensity fits perfectly into Affleck’s low-emotion comfort zone. The great Jeremy Irons brings some welcome badassed-ness to the role of Alfred, effortlessly stealing scenes and laying claim to the film’s most surprisingly interesting character.

In the other corner, Henry Cavill continues to impress as Clark Kent/Superman, finding a subtle nuance in the role that makes his ache for humanity ring true. Amy Adams gives us a Lois Lane that is smarter and sexier than ever, and her chemistry with Cavill brings a new depth to the iconic super couple.

To the delight of arch villain Lex Luthor (Jesse Eisenberg, over the top), the Dark Knight and Man of Steel finally come to blows, and it is glorious. In fact, their battle makes the film’s final act feel a bit superfluous, save for the cheer-inducing entrance of the new Wonder Woman (Gal Gadot).

The ironic twist to her slightly-more-appropriate-for-crime-fighting outfit is the instant reminder of just how masculine the entire superhero universe remains. Still, there is enough mystery here to hold out hope that Wonder Woman’s upcoming stand alone film will be one of overdue substance.

After the rubble finally settles, Dawn of Justice is just that, as we get glimpses of the other “meta-humans” that will take their places in the upcoming Justice League franchise. Batman v Superman wanders, but it’s enough of an epic to make following it worthwhile.